A forum for discussing issues relating to trailers and towing MacGregor sailboats.

At the low end, the Carport-in-a-box, 12x20x9, at $500. The Carport-in-a-box would need to be raised up to clear the mast, and the bow and stern would stick out, but it would meet my minimum requirements (just barely).

There are options in between, but they, too, would require raising, as they are generally made for cars or other such things that are not as tall as a Mac 26 on its trailer.

I might be prepared to pay for the Sheltercoat Peak if I thought it would maintain its value reasonably well. But I suspect that depreciation is pretty steep on these things. The Carport-in-a-box seems like not too bad of a gamble since it's not a ton of money if it turns out I don't like it. But it does seem pretty marginal.

I went with the lifted carport option. I used nine chain link fence posts and post clamps from Home Depot to raise our 12x40' carport to a clearance height of 11', enclosed one end and built a "dock" that we can back the boat up to for ease of loading and unloading. I absolutely love it! You can see photos of it if you scroll to the bottom of the page on Chameleon's website: http://svchameleon.weebly.com/captains-log-2012.html
Top

I bought the Shelter Logic similar to the first one for my 1959 10 ft. O'Day Sprite. I think it is a 16 ft. x 8ft. x 8ft. I have been very pleased with it. It came though Hurricane Irma's 85 m.p.h. winds in Orlando with not a single bit of damage, and boat was well protected. I did leave the doors partly unzipped, and the wind unzipped them the rest of the way, but everything inside was in good shape. I did buy and install two extra anchors and two extra diagonal supports when I bought the rig, and I installed 2x8 boards along the sides so my yard guy would not cut the vinyl with his Weed Wacker!
Top

I purchased a 12' x 31' carport, with 11' high legs, meaning, I can stand on the deck of the boat and not hit my head on the overhead supports. I then bought (separately) additional 30' panels for installation on the sides- two panels each side, so I only have about 5' of side "exposure"- well below the rub rail. Keeps sun, rain and sideways blowing snow off/out of the boat. All told, including 10 tons of gravel for the site, some minor site grading, and the additional panels, I'm in it for just under $2K.

I'd include a photo (pre-side panels) but I'm not signed up for any photo sharing sites.
Top

I have been looking into covers that either reside on the mast or use a PVC pipe type structure to keep off the mast. I have seen the cover from The Sailware House available on Amazon (https://www.amazon.com/MacGregor-Classi ... B00IGYISV0). These run around $900. Anyone have any luck with these or opinion compared to the carport option?
Top 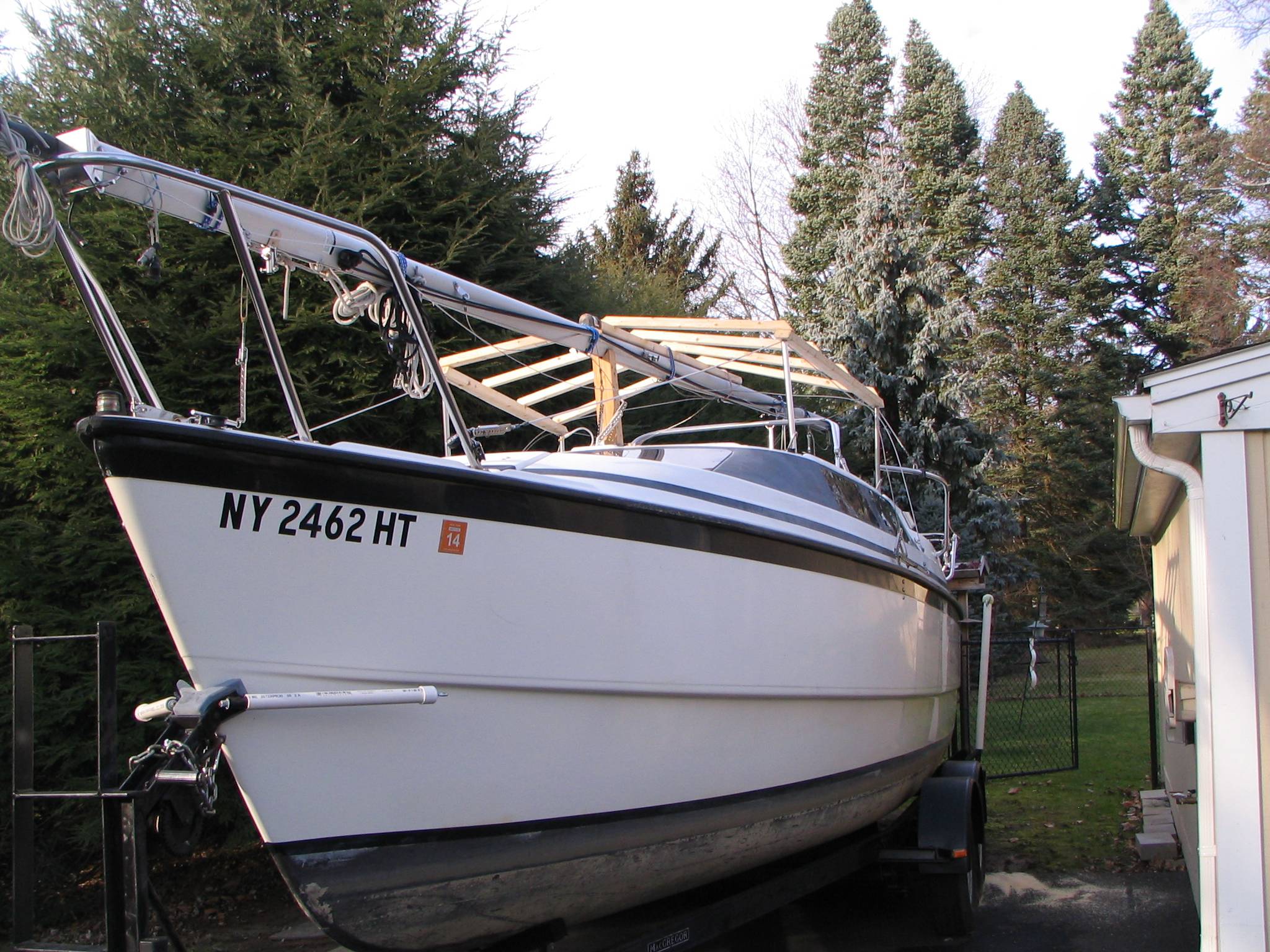 and $50 worth of Harbor Freight tarps plus some super cheap line from Home Depot . . . 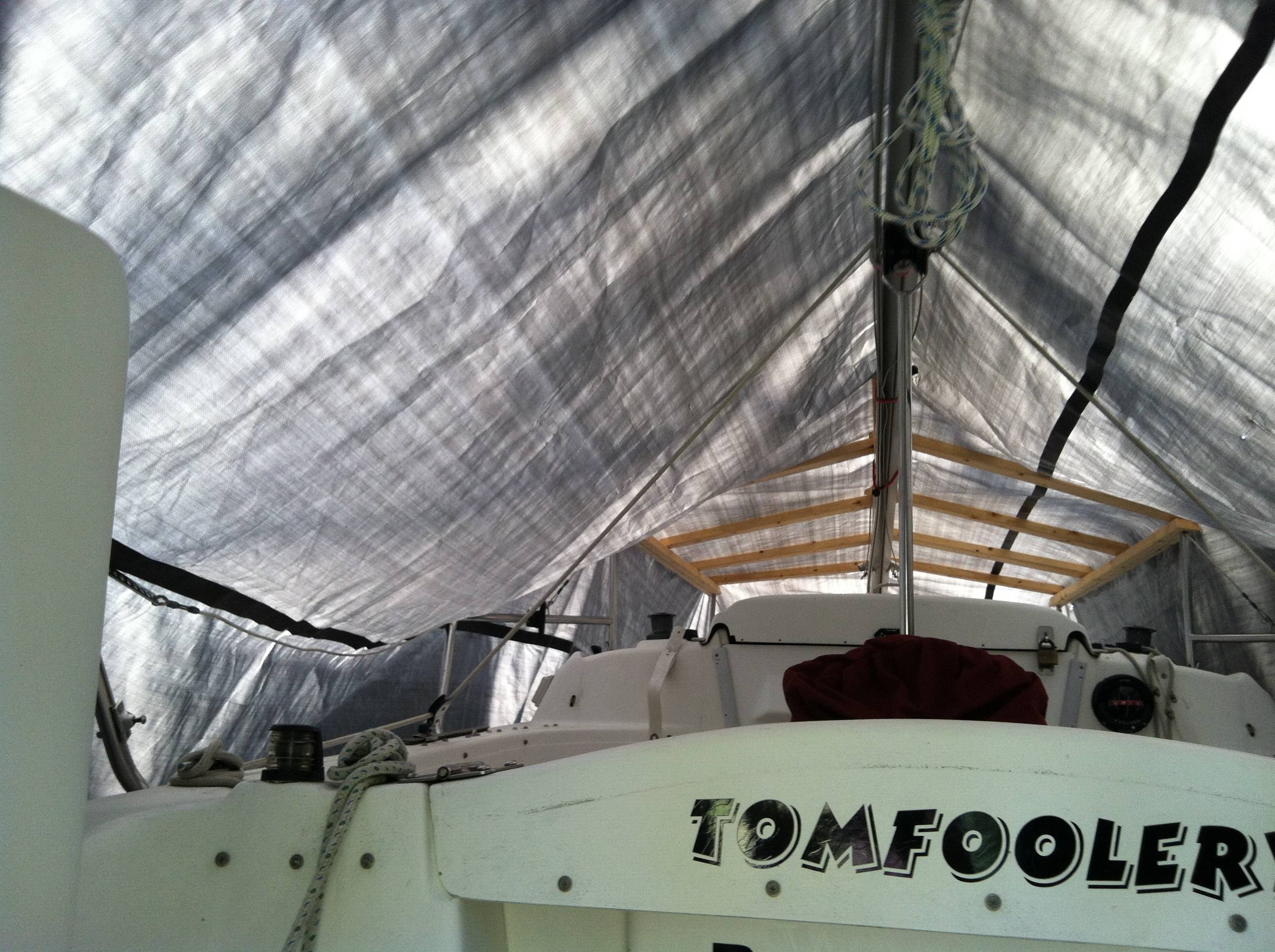 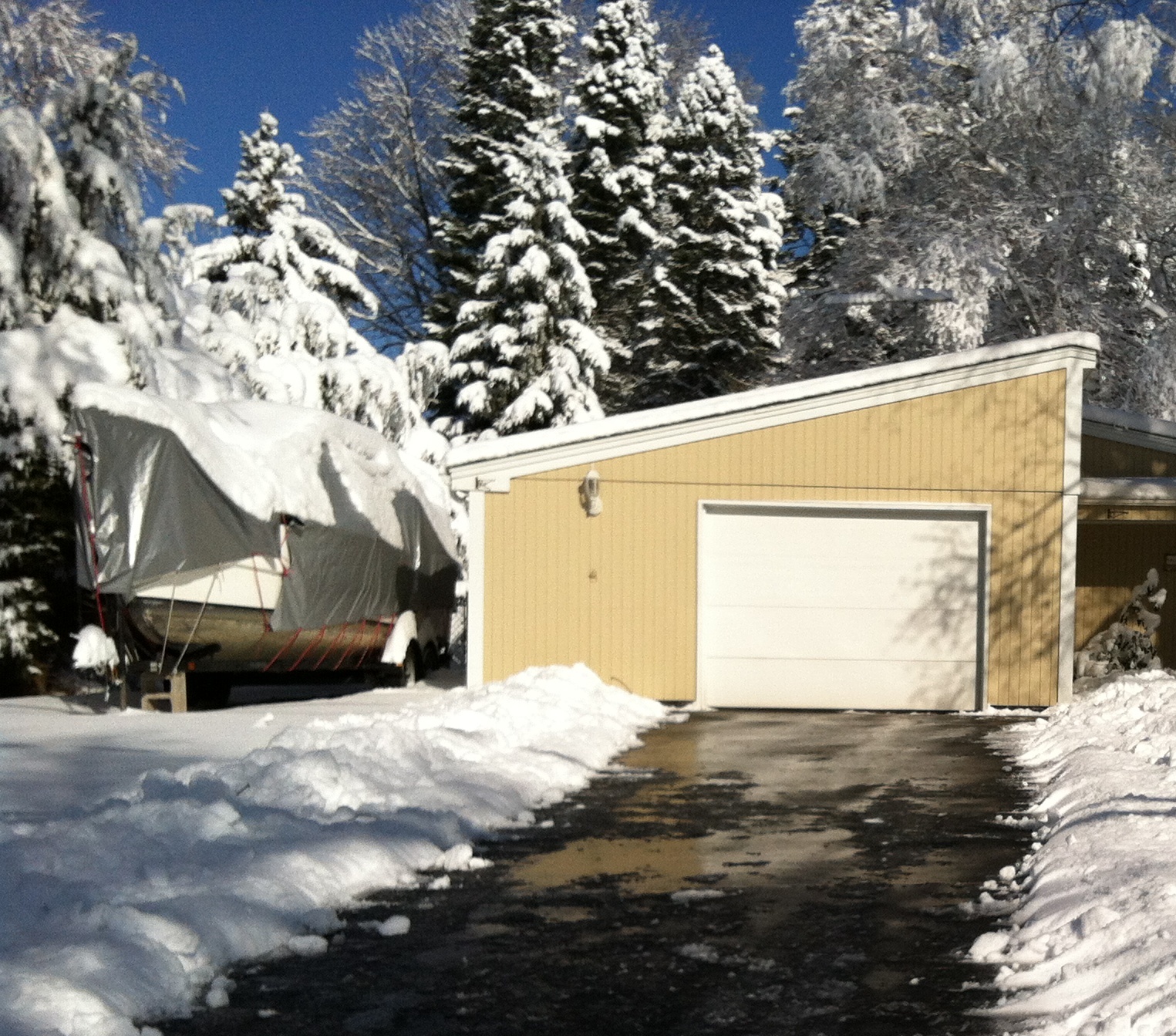 I do slacken/remove the life lines, by the way. And if the snow gets too deep, I use a snow rake to pull it off when I'm doing my in-laws' house (winter caretaker

), but that's rarely needed, even with 100" of snow average snow fall around these parts. It usually just slides or blows off.
Top

I love it. Are you using two tarps? What are you doing at the tarp seems? Any problems there?
Top

Yes, two tarps. Small at the bow goes on first. Larger one overlaps it. Since the deck near the bow slopes forward, nothing gets under that seam, which only has maybe a foot of overlap. Maybe. I ties the small tarp to the wooden mast support post that sits on the plate and to the lifeline stanchions. The big tarp is tied forward and down.

It would actually be much less work if I threaded a line through all those holes in the tarps first, then laced it down with separate lines. I've been threading all those holes every fall, and that's time consuming. It would be much easier to just thread through a perimeter line. Maybe this year.

It ain't pretty, but it works, and it's never moved or lifted or ripped. 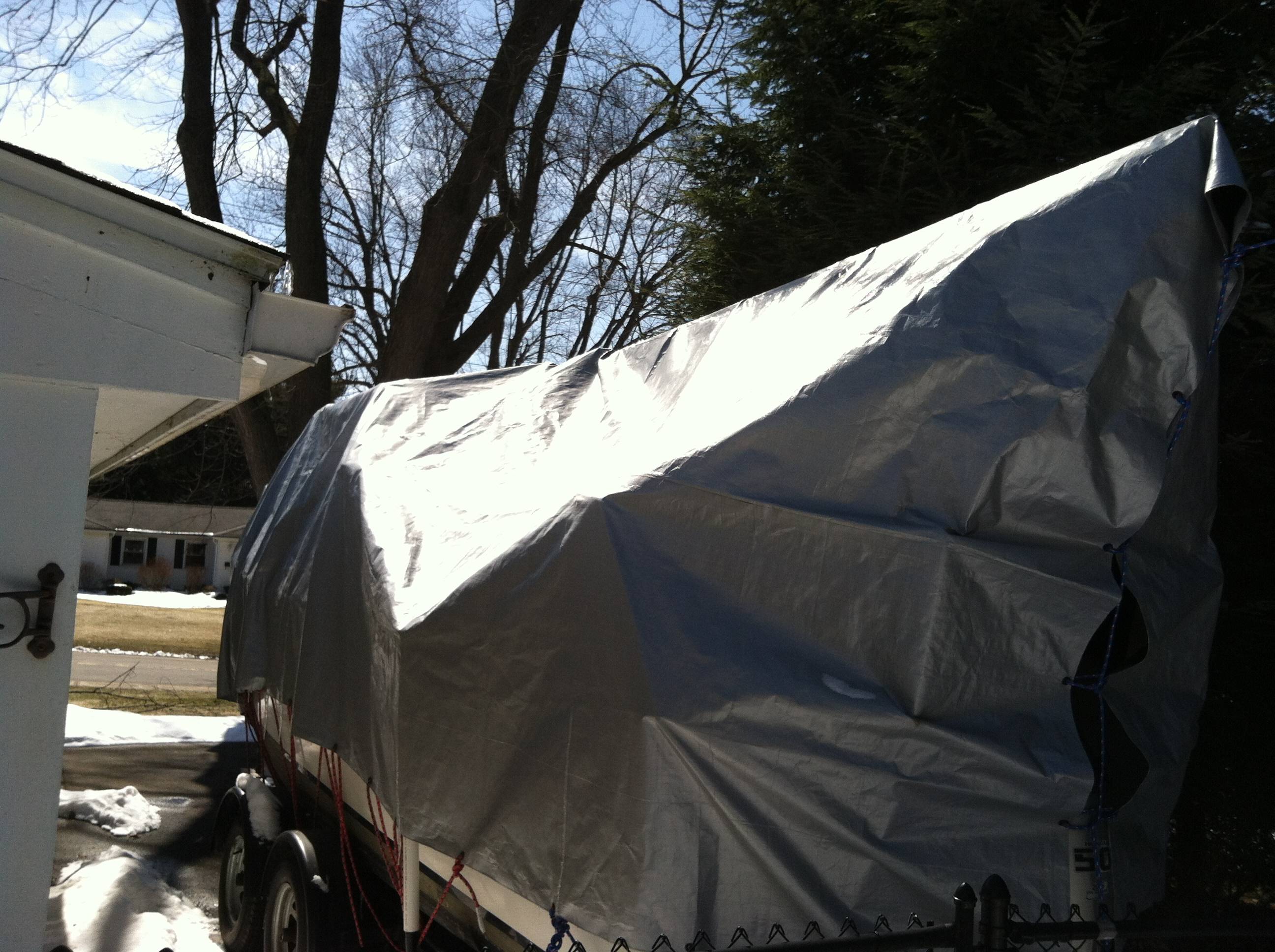 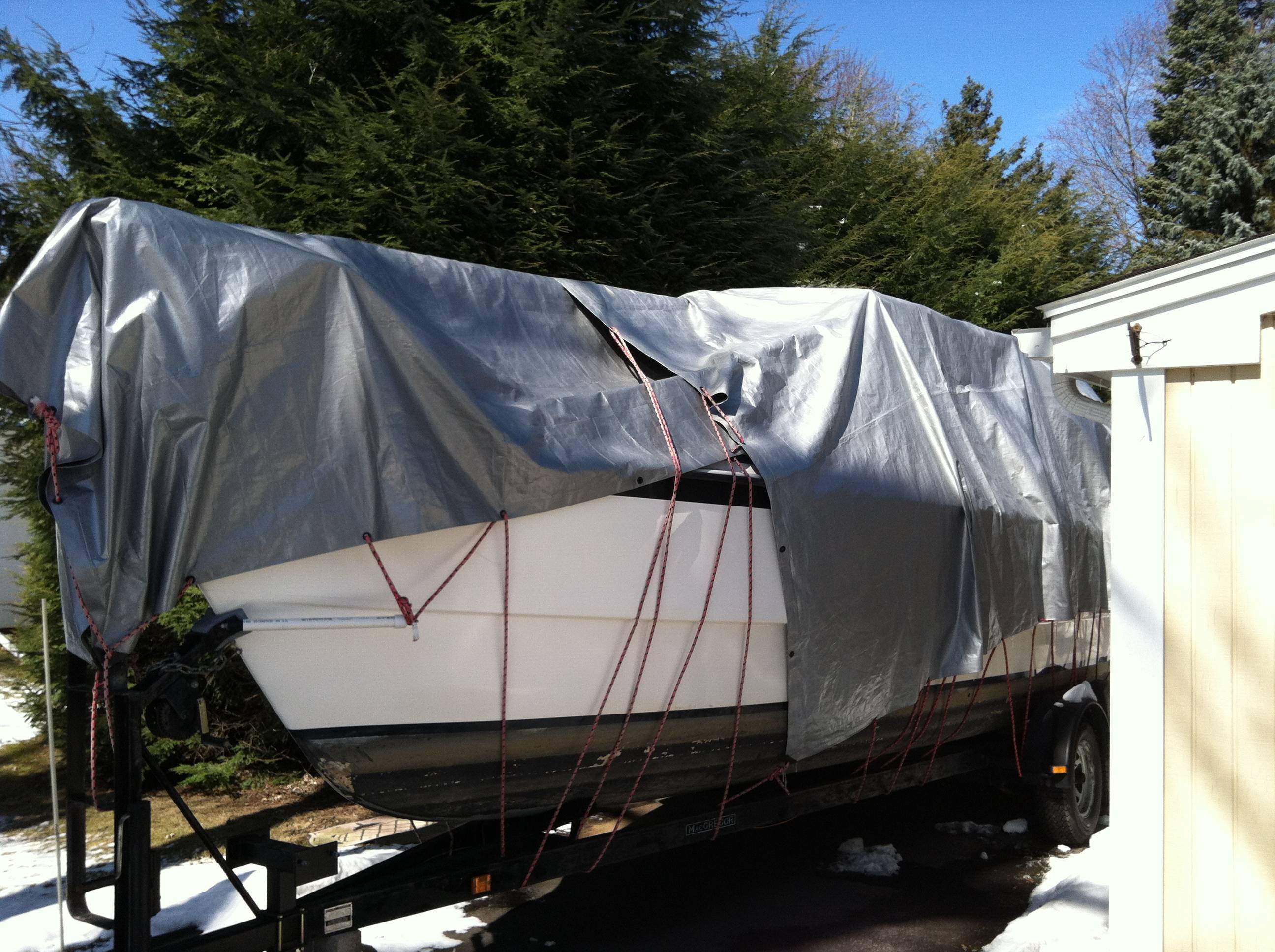 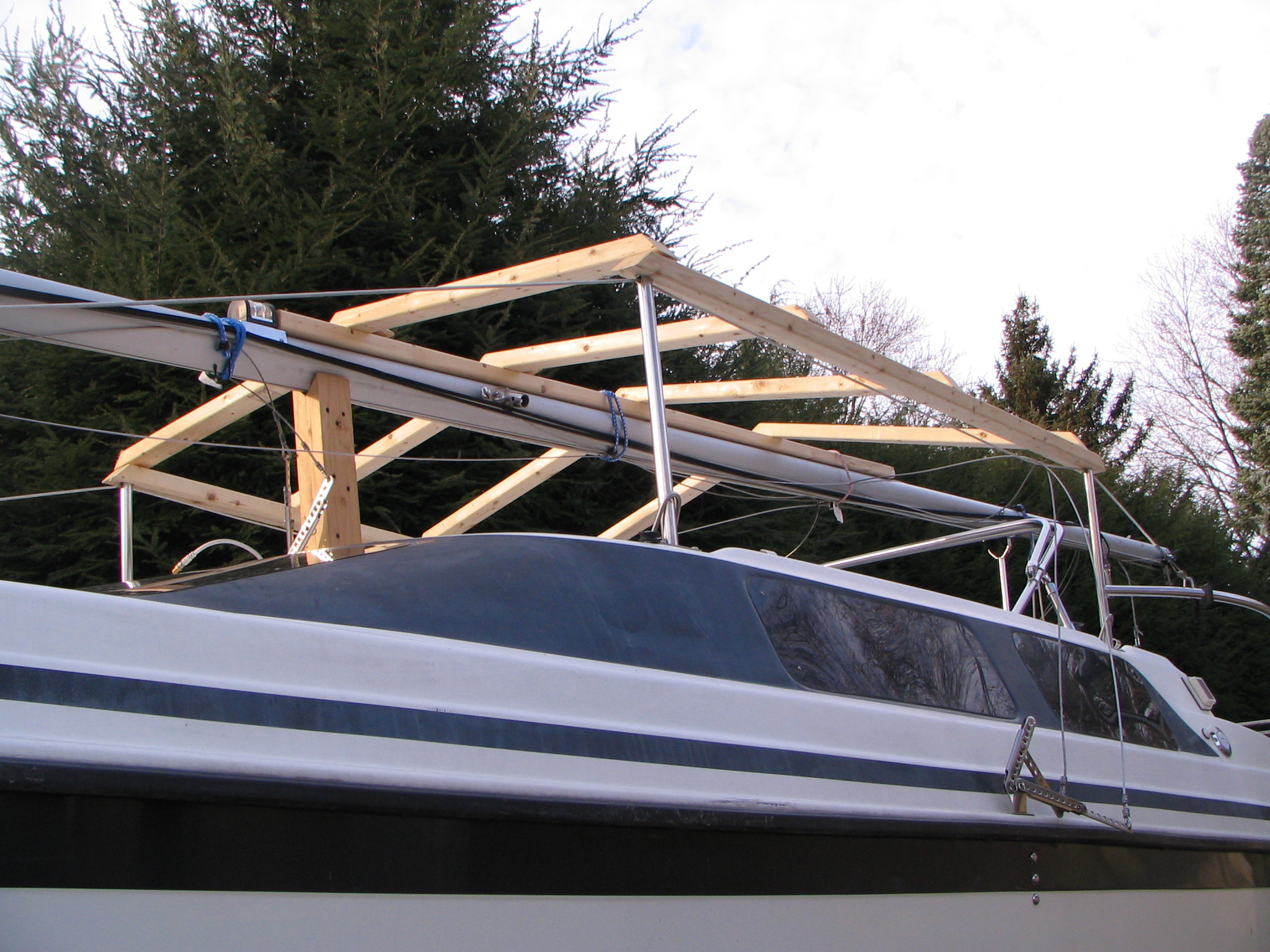 The 2x3 ribs are different lengths, so they're marked 1-4 and port/starboard, as are those on the stanchions and the one on the mast, which just sits there. The stanchion 2-bys are drilled with a forstner bit to make snug pockets for the tops of the stanchions so they can't move. I've though about adding more ribs further forward, but the snow just doesn't accumulate that much (that pic with all the snow was after a very heavy storm), and if it does, I just rake it off.

If it actually worried me, it would be easier to make a couple more support struts to the cabin roof. But it doesn't.

Oh, and my VHF antenna at the top of the mast folds 180 degrees, and I remove the Windex, so no worries about the end of the mast. Now that I have an anchor light up there, I may have to consider removing that, too, or putting a very short support on the face of the mast, just long enough to extend the tarp support past it.

I always tie the stern closed with a separate short line, so I can open it and get in there once or twice during the winter. Mothballs kept the critters out this last winter, but it took half the season for the smell do go away. Maybe I'll just tie some bags of mothballs at the openings where they sneak in, which must be where the sliding hatch meets the hatchboard, as there are no other openings that aren't closed airtight, like the opening ports under the cockpit seats.
Top

I like Tom's frame. Looks well designed and sturdy.
Also note the verticle mast support. This is important if you get snow weight on there. I had my mid support pop out and the whole mast was crushed to the deck. After removing the snow/ice it snapped back. But it was unnerving.

I finally got a pic of my Shelter Logic "doghouse". Just one word of caution with tarps. I had a large tarp on my Mac when it was on the trailer, during Hurricane Charlie back in 2004, and my tarp became a pretty good "spinnaker"! Boat and trailer ended up 50 feet away in the street, whereupon a pine tree decided it would be a nice place to fall! Chock those wheels! I find there are two problems with those "cheap" tarps sold at most home improvement stores (think either orange or red aprons). First of all, they aren't all that cheap (a 20x30 foot tarp runs around $80), and second, they don't last all that long, about 2 years in our area. I got a commercial grade heavy duty tarp, the kind used around eastern Washington to cover large piles of hay bales. Mine was made at a factory in Moses Lake, WA, and it's creatively known as a "hay tarp". It's white, for reflectivity, and very UV resistant. Heavy duty grommets, none of which have ever torn out. I use it over a framework made of 1 1/4" pvc pipe. It's 20x30', and I cover the boat with this tarp every winter. It's on the boat from November until April most years. I paid $350 for it, and I'm going into my 13th season using it. It shows virtually no wear, and I expect it to continue serving for a good number of seasons to come.
Top

As far as tarps go I have been getting the old billboard tarps . They do not have grommets so you have to install your own. They hold up very well and are cheaper than cheap tarps, if up can find the size you need, the stock is always changing. The ads are only on one side or so fsr the one's I have gotten have been.

One of the nice aspects of the Shelter Logic vinyl structures is that the vinyl is very substantial. I haven't seen any wear or holes and I have had mine for about three years. One nice thing about having a free standing shelter is that it makes a very nice place to do repairs such as painting, epoxy, and anything that requires a sheltered place to let surfaces dry. It is also great for storage of lines, anchors, cleaning gear, paddles, fenders, and "you name it"!
Top

Thanks again, everyone, for all the great replies.

In the end, I went with a Shelter Logic 25767 (http://www.shelterlogic.com/shop/super- ... 12-x-30-ft), which is a 12x30 open canopy. The quality seems very good and it was quite easy to assemble. I actually built it right in place, over the boat, because my driveway isn't very long and the alternative would have been to leave my cars on the street while I put it up. That all went quite smoothly.

We get very little snow here, so I mainly need protection from rain and sun. Plus the plum tree over my driveway, which drops very nice fruit and very nasty sap.
Top

A very logical shelter, if I may say so!