A forum for discussing boat or trailer repairs or modifications that you have made or are considering.

Chip Hindes wrote:OK, so I measured the X boom and it is in fact 10'6". So any guesses as to how the M sail is a full 19 square feet larger than the X?

There are many possibilities. As to the overall question, I'm not inclined to enlarge the mainsail of my X. From reading reviews, it seems to me that most sailboats can carry their full mainsail at much higher windspeeds than the Mac, which demands a reef at about 15 knots to counter uncontrollable rounding.

I guess the boat is relatively lighter than most, dictating less mainsail, or maybe the rudders are too small ...

Thanks for the input, particularly the comment by Tampa Mac - which led me to do more research-


The Aspect Ratio A/R is the height of the sail squared, divided by the area of the sail.

As the A/R gets higher, the sails get less efficient at anywhere other than close hauled. Racing sails commonly have an A/R between 4 and 6 for good upwind performance.

Most cruising sails have an A/R between 2.5 to 3.5, with a max of 4, for good all around performance.

Anyone know what the height of the sail is on the Mac, not the mast but the sail?
Top

Greg wrote: ... Anyone know what the height of the sail is on the Mac, not the mast but the sail?

Herman Wadler's website has several pages of Mac statistics. Click the "Macgregor" button, then browse around to find the following dimensions of the mainsails:(Chip - back to your geometry, and guess you might even determine if the tack is set at 90 deg). These raise a question, for me, of the length of the boom. I recall measuring mine at exactly 11 feet, though Chip just checked and found a half-foot shorter. I'd think that is too short for the mainsail foot(s?) shown above.
YMMV -

The M sail appears to have quite a bit more roach, something they could easily add now that the backstay is gone.
Top

Well, the "new" dimensions pretty much answer the question. Although the M mast was stated to be 2' taller (and which I based the original calculations on) the sail itself is actually 3'5" taller.

If you redo the numbers with the actual sail dimensions, by the straight geometry of the roughly triangular shape, the area is equal to the luff times the foot divided by two. Do the numbers and the M sail is (again roughly) 18 square feet larger than the X. Certainly the one square foot could be a fuller roach, whatever; while I won't accept a 19 square foot "error" a one square foot difference is in the noise.

As far as the foot being too long for the boom, the measured boom is 10'6" not including the fittings, etc. Add in about 2-3" for the gooseneck fitting and that about does it. You can't make any allowances for the sail slugs because there is none at the clew and the foot of the sail is not affected; besides, the sail is designed to be used as a bolt rope sail, the sail slugs are strictly aftermarket add ons. I will confirm that with the outhaul tight the rear edge of my sail is no more than an inch from the end of the boom; at times I wish I could make it tighter.
Top

Chip Hindes wrote: . . . You can't make any allowances for the sail slugs because there is none at the clew and the foot of the sail is not affected; besides, the sail is designed to be used as a bolt rope sail, the sail slugs are strictly aftermarket add ons. I will confirm that with the outhaul tight the rear edge of my sail is no more than an inch from the end of the boom; at times I wish I could make it tighter.

You remind me that I rig my mainsail by just hooking the tackeye on the reefing hook, which may take an extra inch. Nonetheless, my fully taut sail is 4 or 5 inches shy of the boom's end. I think the two boats are within six months build date - should be identical. I'll do some measuring next weekend at the marina.
Top

Frank, In my quest to keep up with the Hindes' (aka being a member of the "under 20 minute" club), I was going crazy with quickpins a couple months ago and used one for my boom attachment point. Of course, that didn't work (doh!) since the first time I raised the main, it pulled the boom right off the mast! (it was still suspended by the sail though) This made it unreasonable to attach the sail there anymore so I had to attach the tack to the reefing hook like you. However, now there is wrinkle in the luff down low so I don't like it. Perhaps this is because of the sail slugs pushing the sail aft and it wouldn't happen if you fed the bolt rope into the mast track.

Anyway, I guess I'll go back to a bolt for the boom attachment point and just use a quickpin for the sail tackeye...ahh, but it was so nice not to have to use any 7/16 wrenches on the (one) mast stepping

I suppose I could also use a clevis pin and ring ding, but not sure if that would add much or any speed to the process.
Top

Dimitri,
I use a quickpin at the gooseneck without any problem. Guess that might be because I'm using the reef-hook - cannot picture that connection right now. But that little wrinkle ... no biggie for me. In fact, 2/3rds of the time, I need a reef, so that wrinkle is a baggie mess of surplus mainsail!
Top

OK, now that I've been through Sail Design 101, I understand the err of my thinking. Thanks to all who responded.

I would like to hear about the end result of installing the M sail and mast on the X. It sounds like there may be a substantial loss of headroom from sole to boom.
Top

Yep, that's been an eye-opener. Never occurred to me that the M was so different in this respect. I wonder if the cockpit sole is lower relative to boom? Even so, it means there's precious little space for vang (maybe unnecessary?) or dodger.
Top

Am I noticing something different here?

The M's luff is 3' 5" longer but the leech is only 2' 8" this doesn't appear as more roach but much less roach than the X main. Someone earlier said they could put in more roach since there was no backstay. Doesn't sound like this is the direction taken. Don't know why but the M's main sounds like a much different shape than the X's.

Newell,
Check your math. The luff's ~3 feet longer, but leech is only 1'6" longer. This COULD mean that the tack is less than 90 degrees to allow for a rising boom - giving headroom in the cockpit? That would be one explanation for the much shorter leech.

Another possiblity . . . I've never looked closely at the rig of an M model. Since it's a rotating mast, seems to me that the shroud tensions would not make so much prebend? This would make the luff longer relative to the other dimensions of the mainsail? Said another way ... shorten the luff of a flat sail & create the belly of an X-sail. Do the opposite, create a M-sail?
Top

Interesting point. Look at the geometry. The leech of the M sail is shorter than the luff. Although this is certainly possible, is it realistic? Two ways you could get this; either the boom comes off the mast with the aft tip angled substantially skyward, or (if the boom is nominally horizontal) there's a substantial aft rake to the mast. I've seen quite a few Ms under sail and I don't remember either one of these being the case. Check this photo: 26M The boom is pretty much horizontal, the mast vertical, and it certainly doesn't appear that the leech is shorter than the luff. If it is, it's a hull of an optical illusion.

So, are these numbers correct and if not, how big is the M sail really? 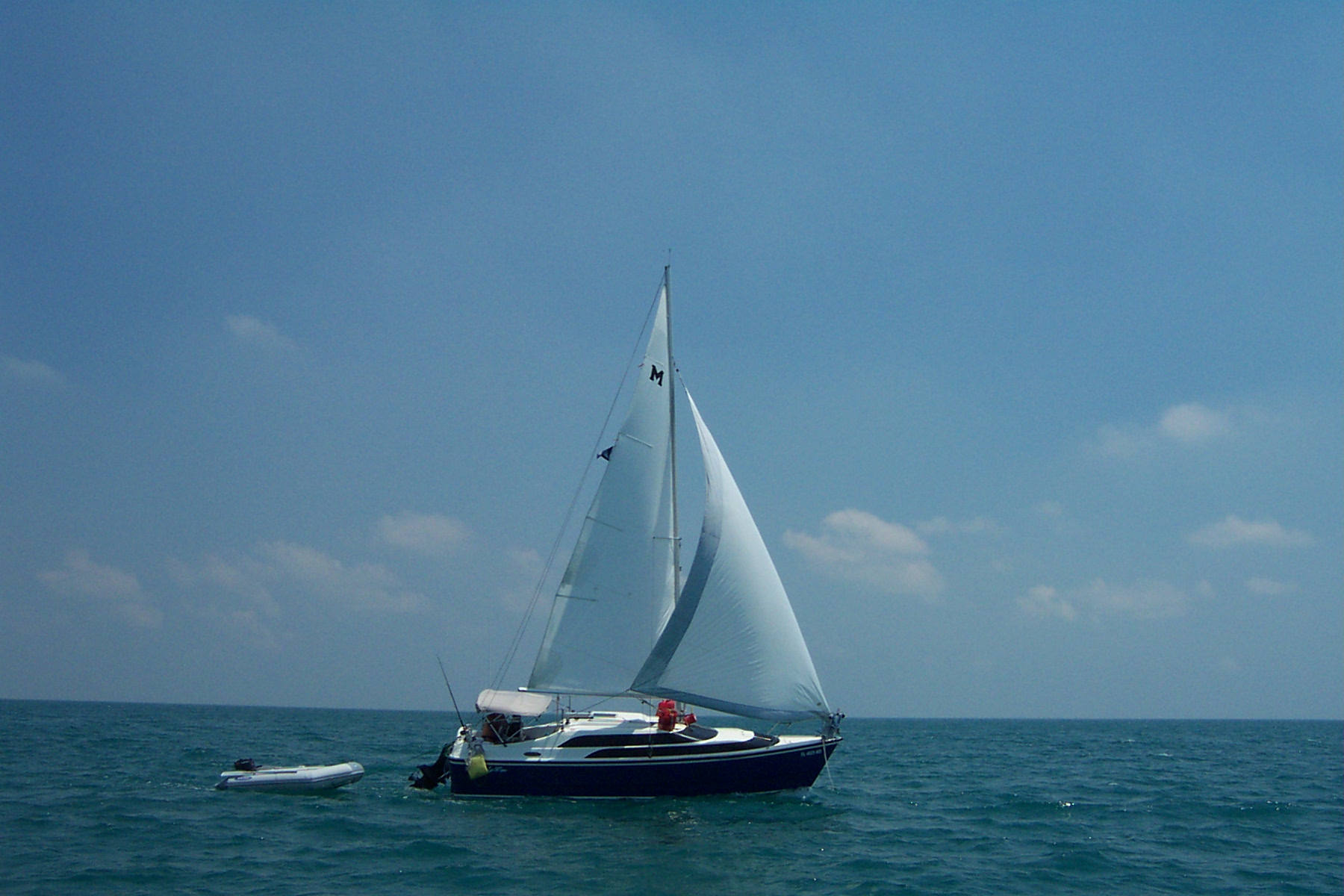 Interesting picture. That M seems to have 2 backstays.
Top

Are those gas cans on the forward stanchions?? Do people really do this?

Am I paranoid or is this not a good idea from a weight distribution viewpoint?
Top
Post Reply
43 posts

Return to “Repairs and Modifications”