A forum for discussing boat or trailer repairs or modifications that you have made or are considering.

So I’ve got the new trailer under Wind Song, thread located here: viewtopic.php?f=11&t=27544

I felt it is a big enough job it deserves it’s own thread but mods if you disagree feel free to merge it here.

I need to start making a list of needed repairs, as well as wanted repairs and maybe “wouldn’t it be nice” mods. I’ll use this thread to document this list as well as show my journey on tackling it. 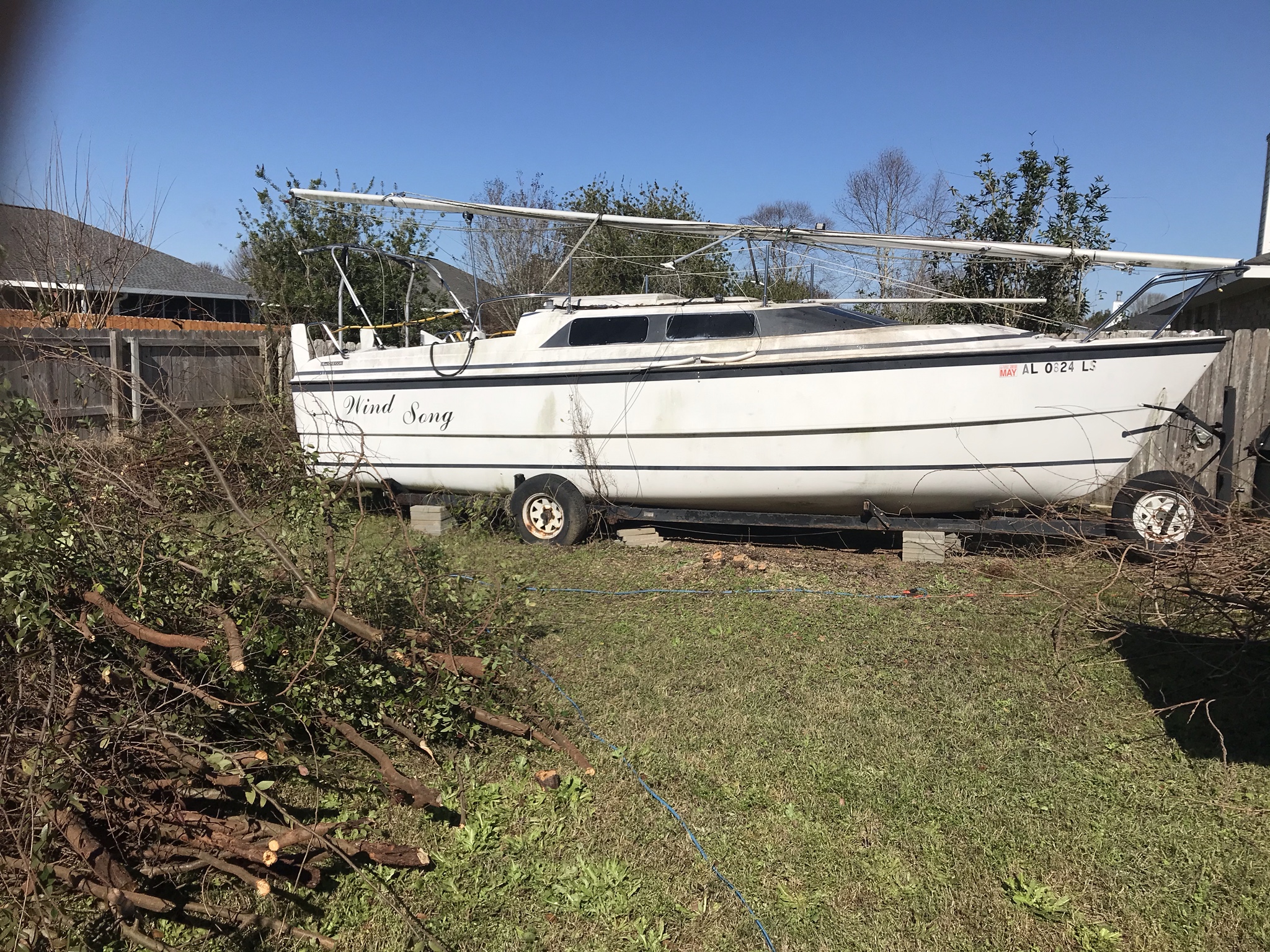 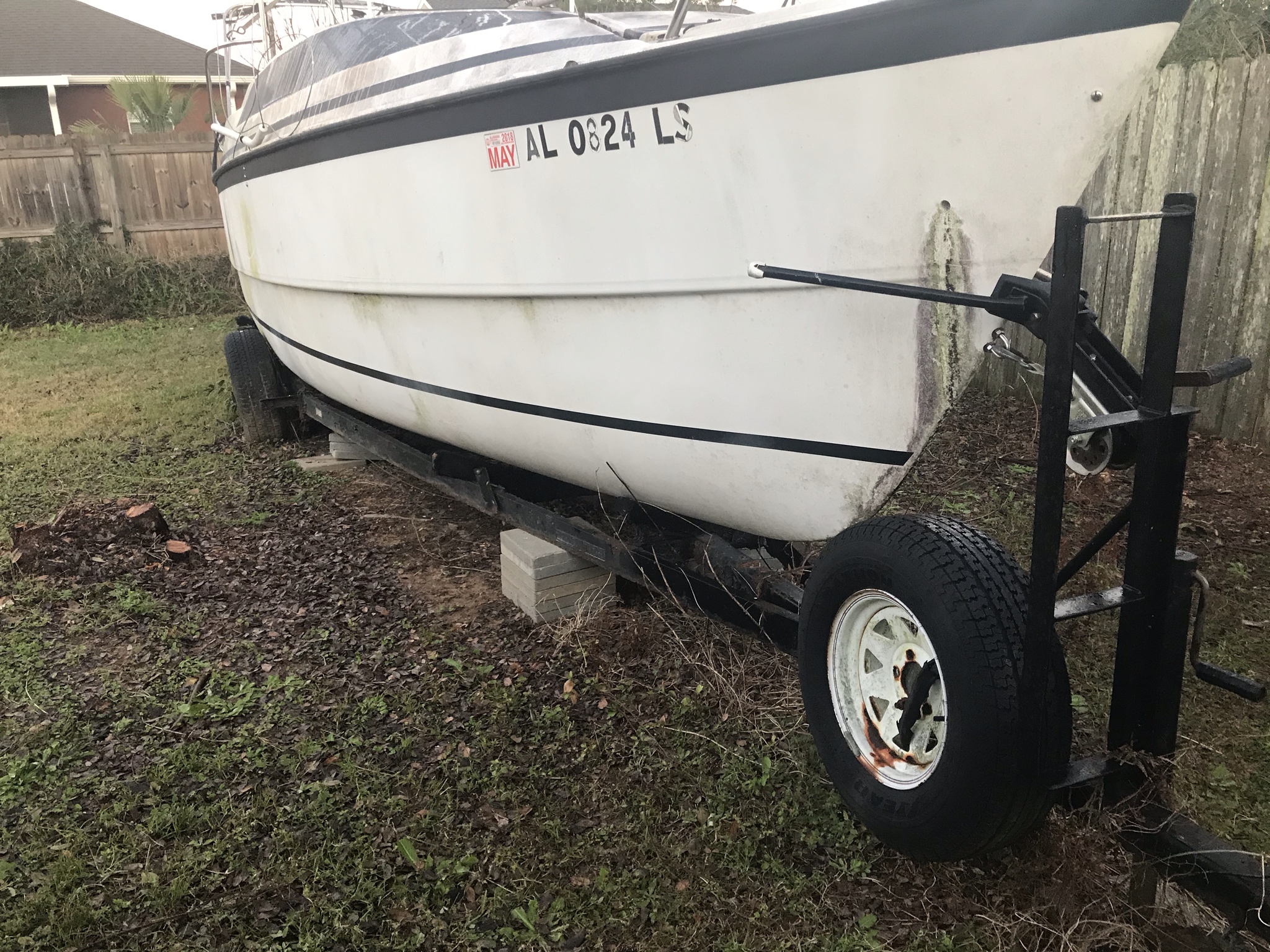 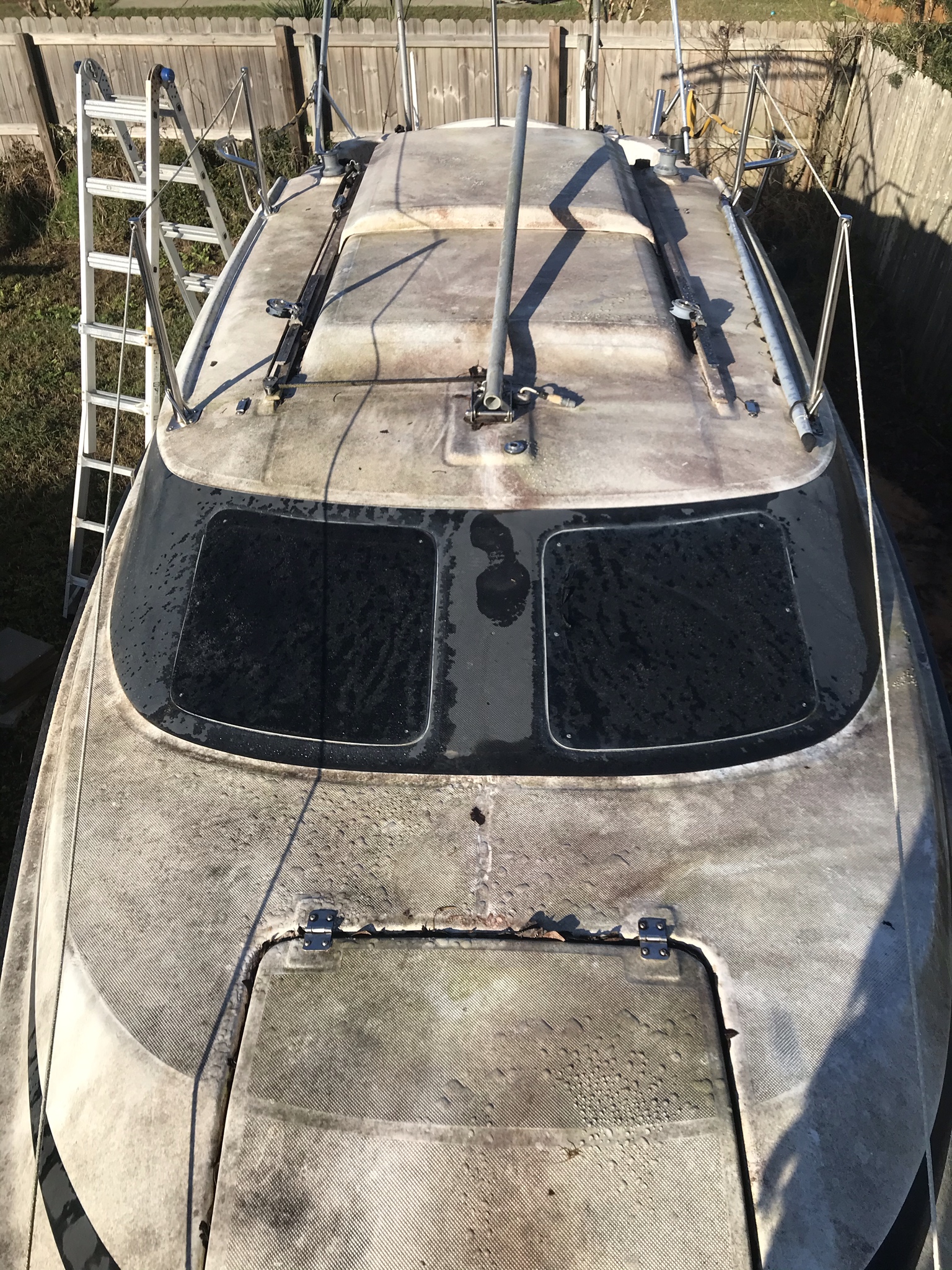 See the pile of brush? See the stump? Yeah, the boat basically had a tree growing into it. 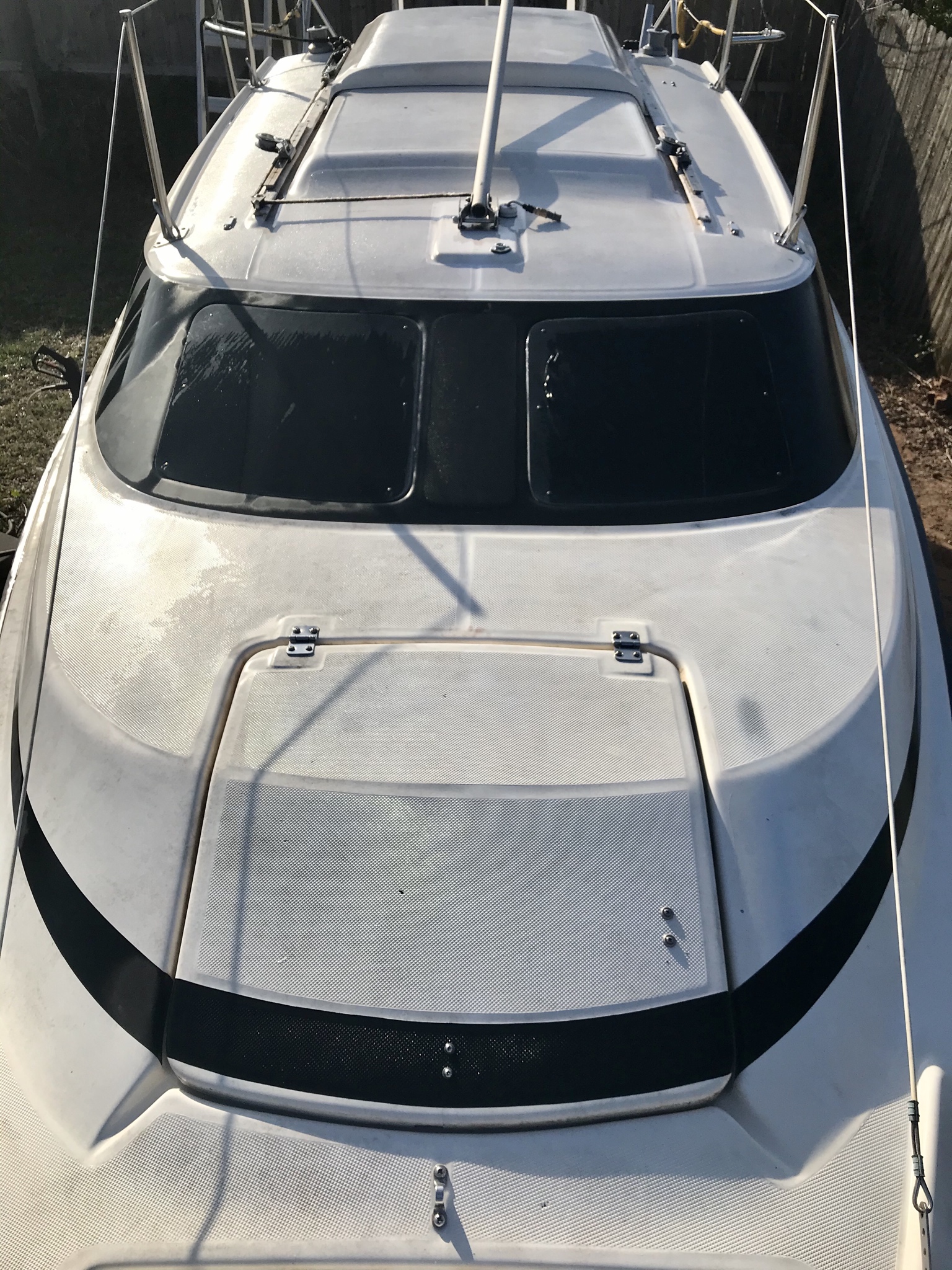 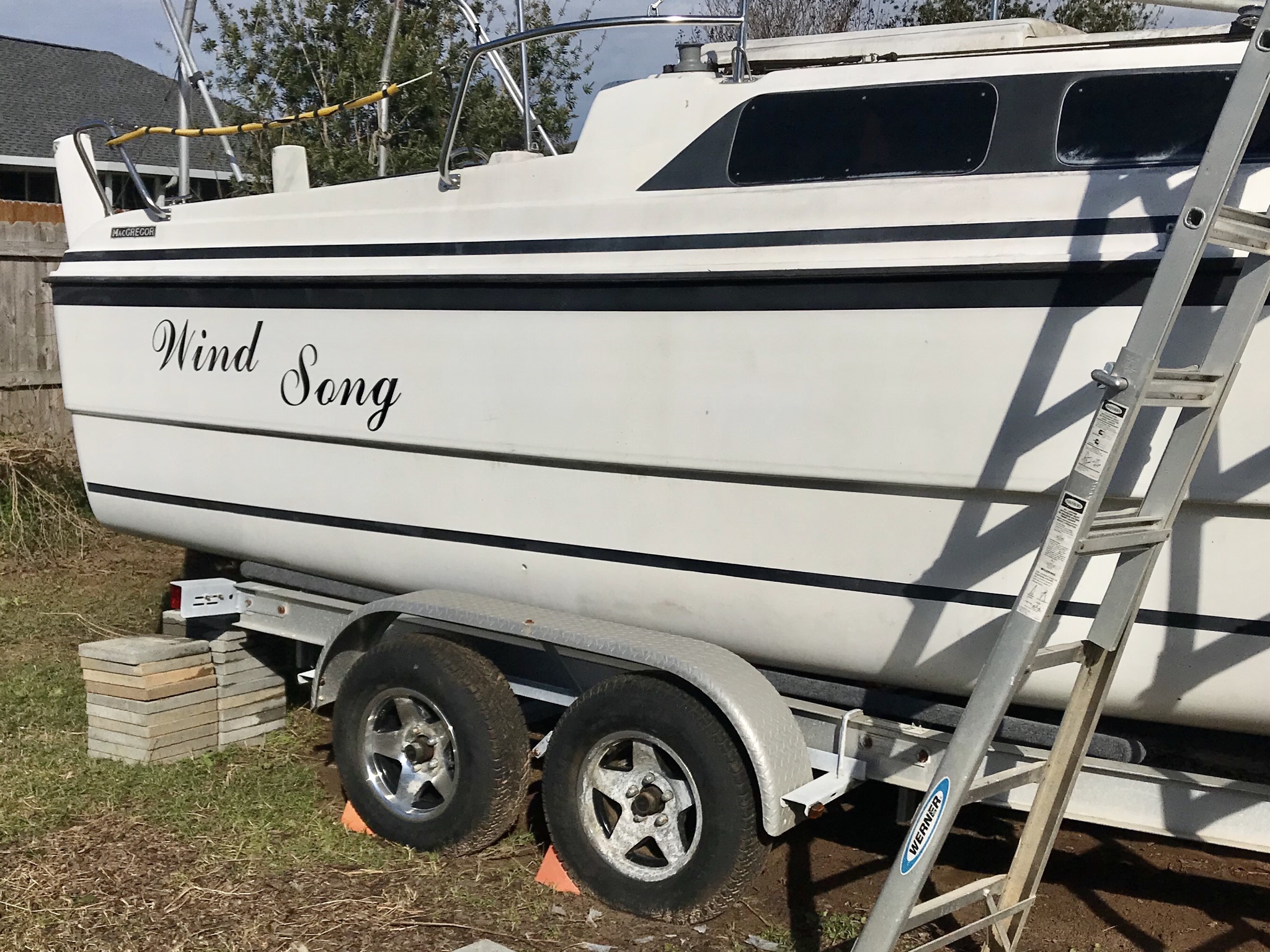 I’ll hit her with appropriate cleaners, and some wax with rubbing compound. At first I thought I’d compound separately but the oxidation isn’t nearly as bad as I had feared. I guess all that filth formed a protective layer.

The hatch sliders are pretty nasty. I might be able to sand them and get a little more life but since I need to pull them and butyl tape under them anyway I’ll probably just go ahead and replace. 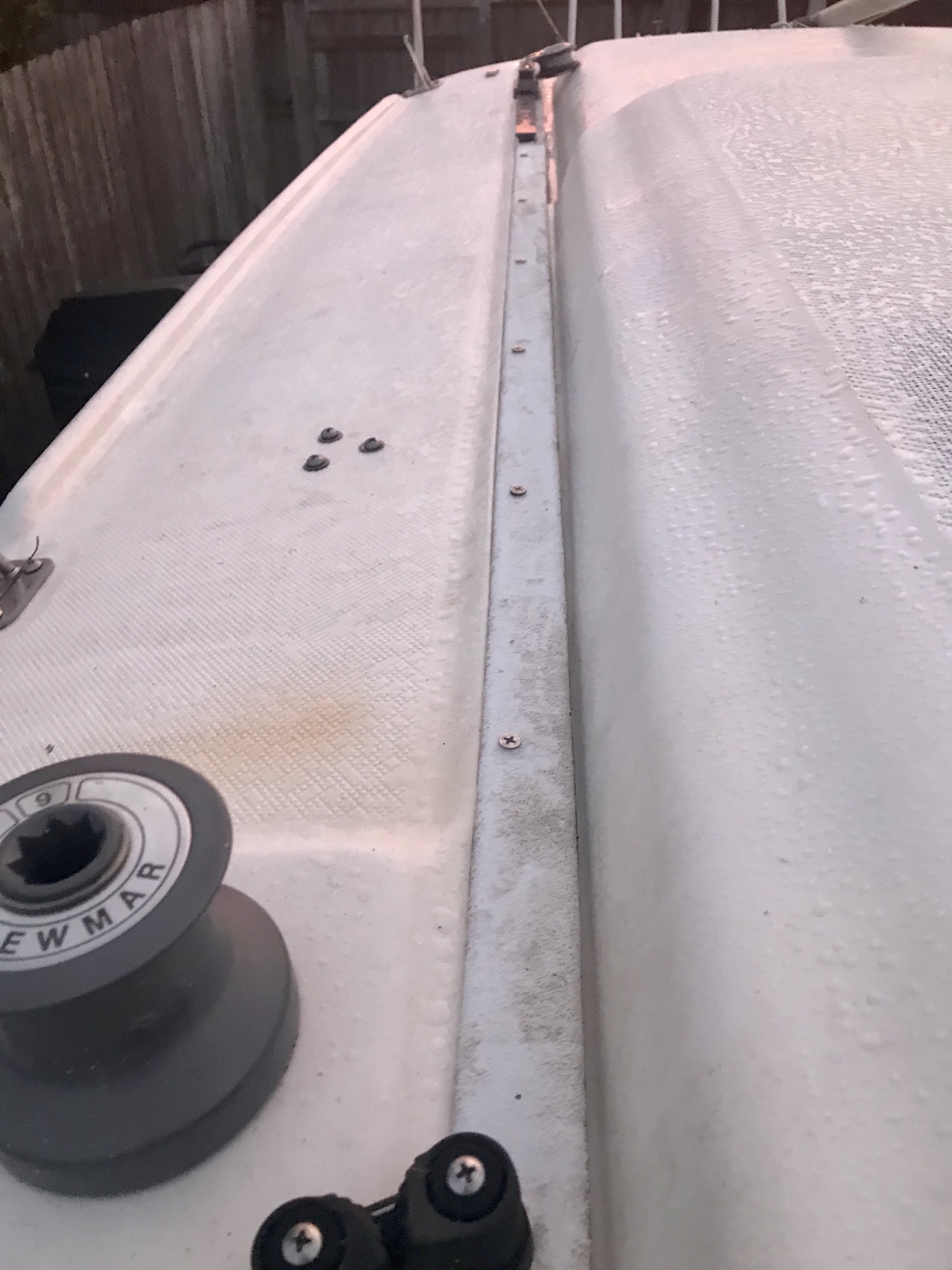 While I’m at it I’ll probably put Velcro under the hatch. It’s one of those mods I wanted to do but never got around to.

The companionway sliders are too far gone to even think about saving. 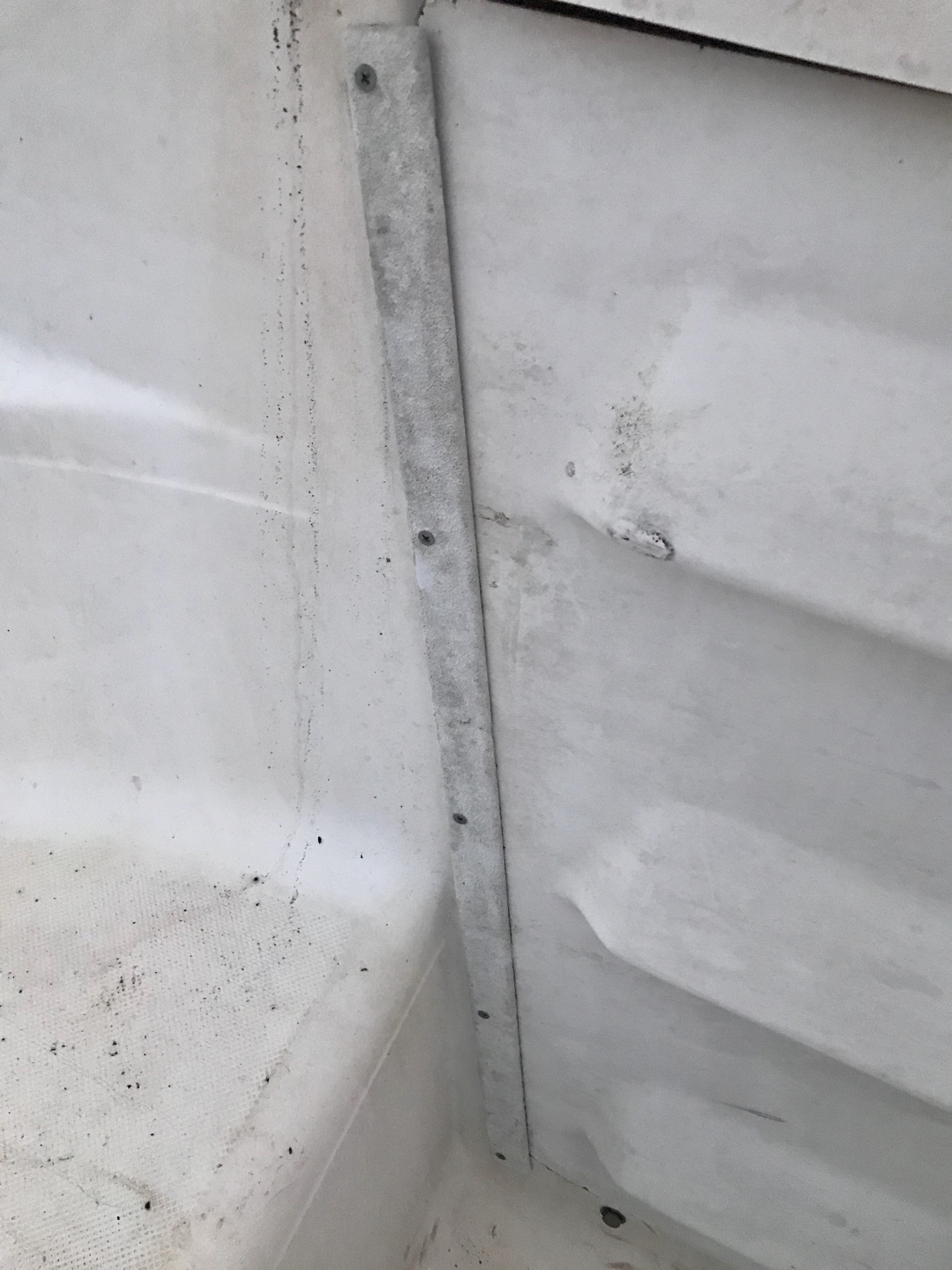 My debate here is plastic again or teak. A “would like to” on my list is to make a three board companionway hatch out of teak. If I end up doing that I’ll probably use teak rails. I might make it out of lexan though. I’m torn.

The handle is toast. I’ll replace it. 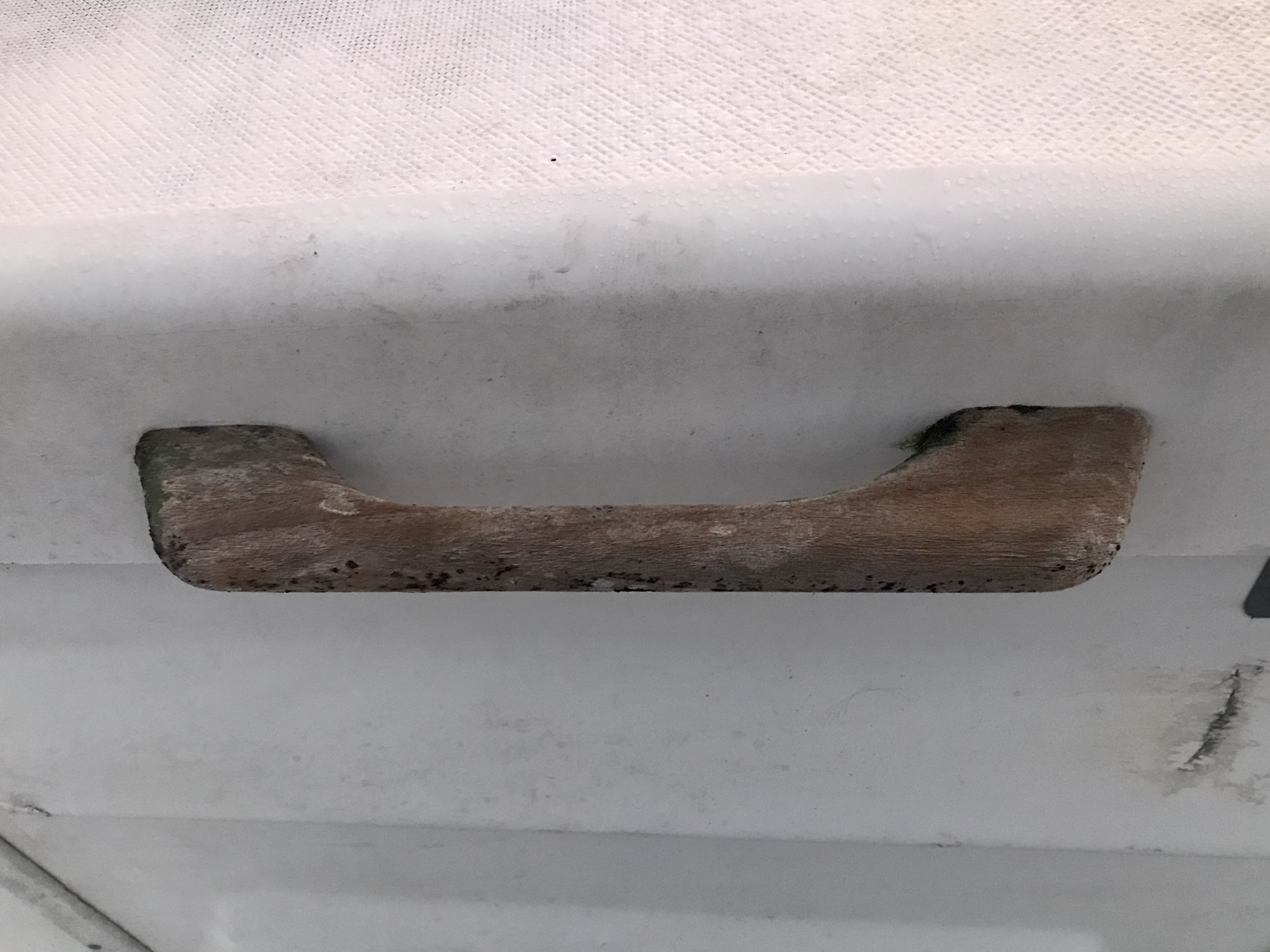 The hatch also has water in it I can’t seem to get out. It has had it for years. I might cut out that botched repair, dry it out and reseal. If I’m feeling froggy one day.

All the lines will need to be replaced: 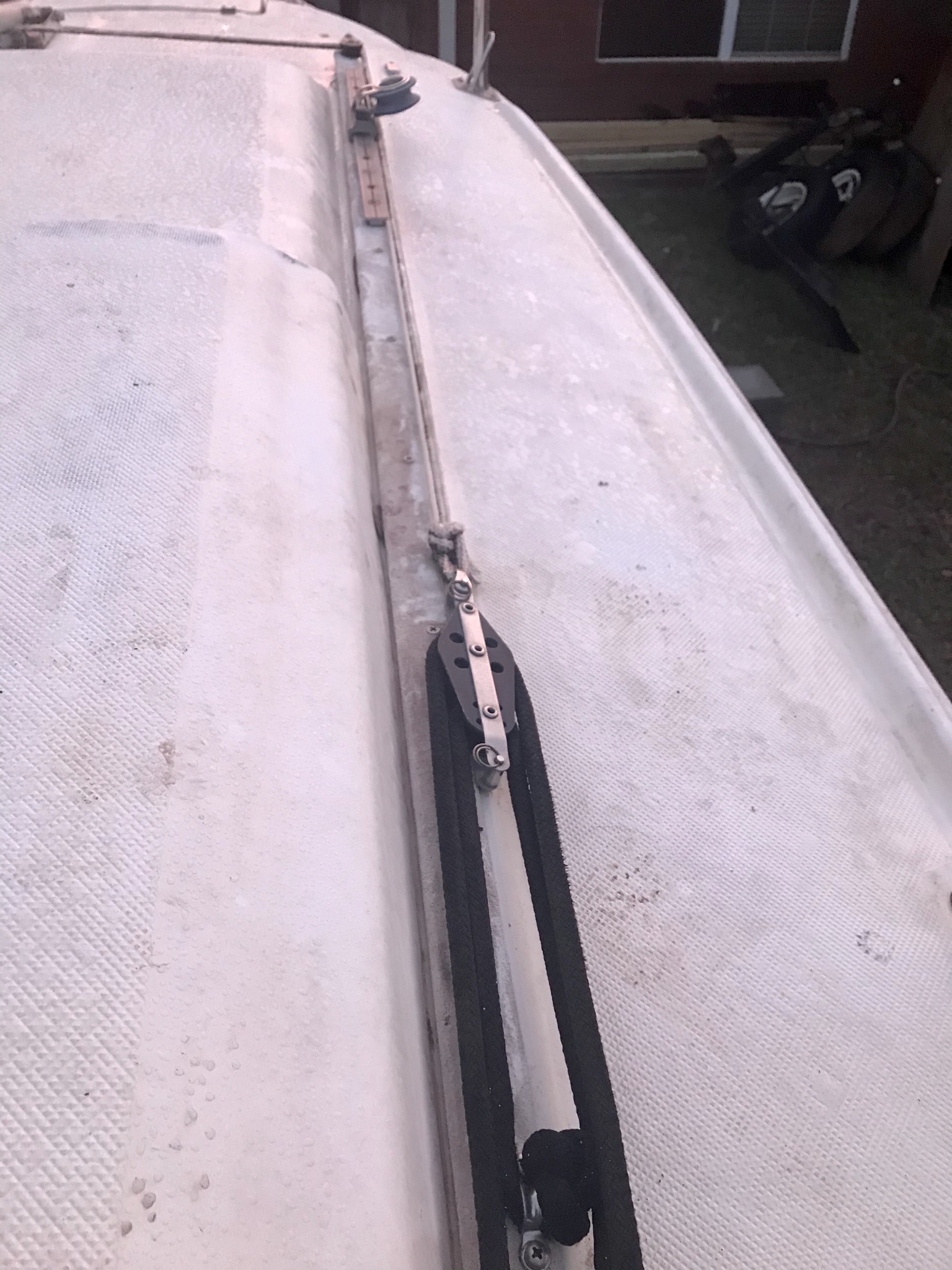 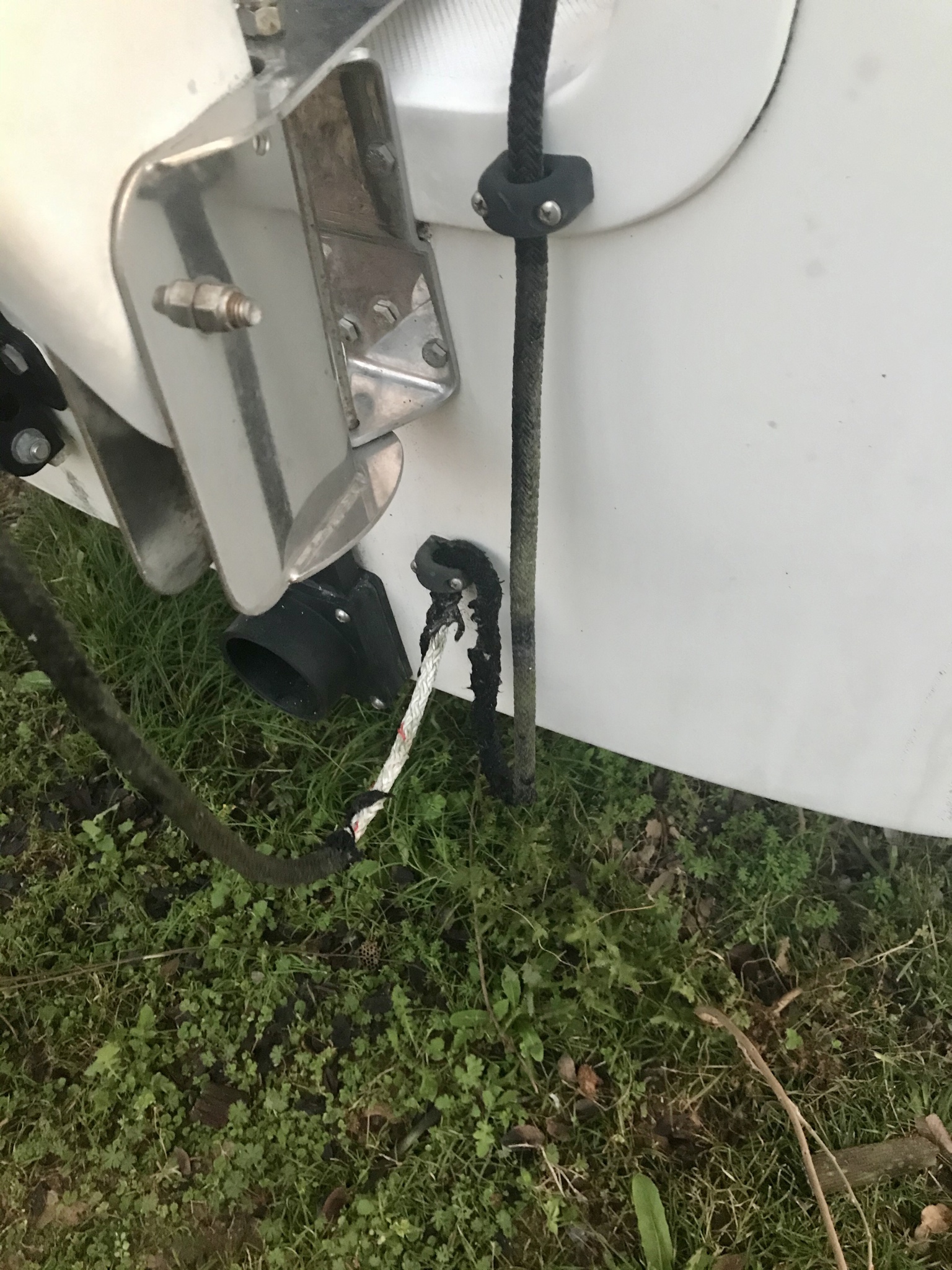 No picture of the mast yet but the lines are in about the same condition.

I like black double braid. I’ll probably use that again.

One of the bow windows is cracked and leaks: 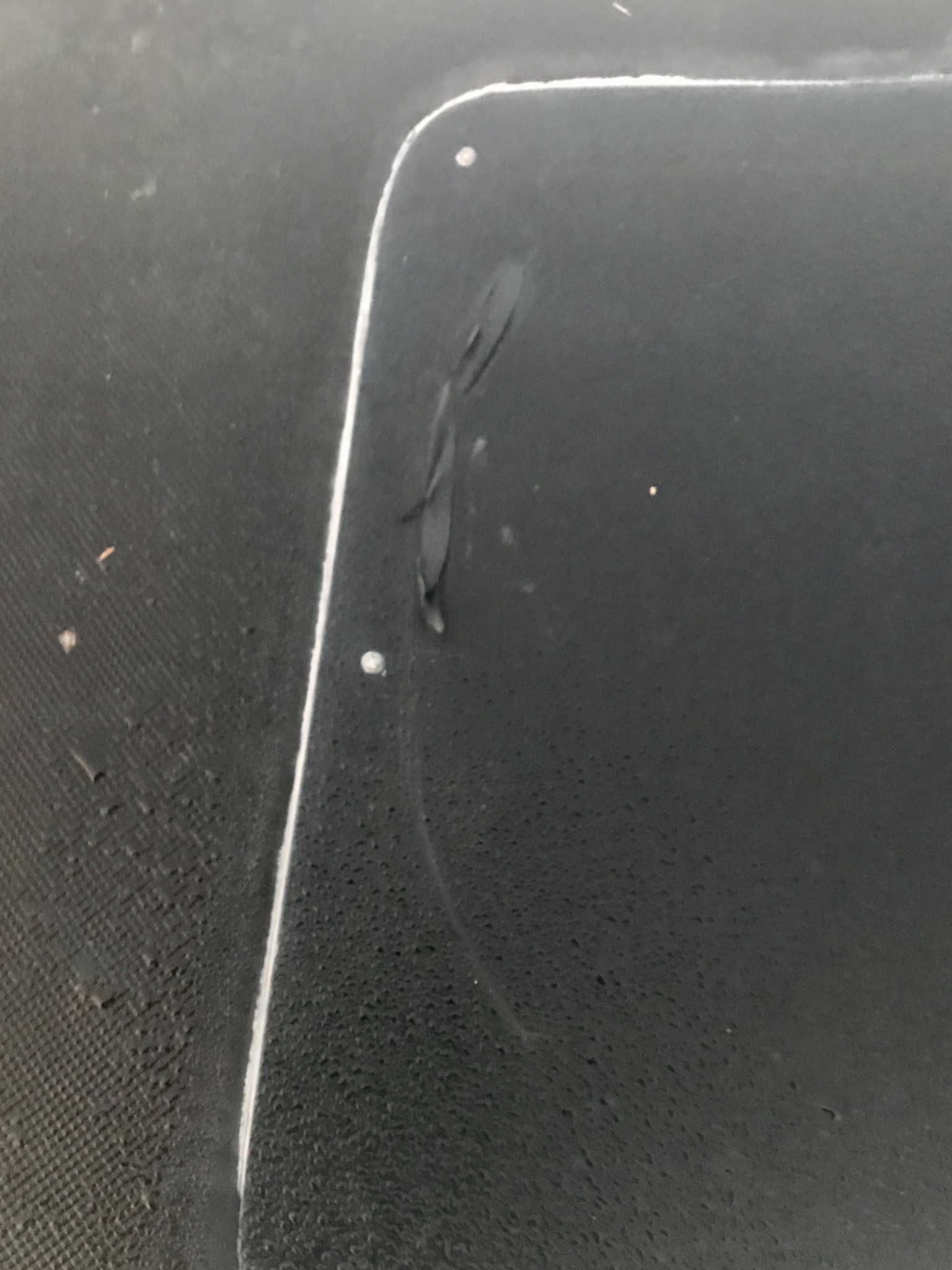 I know ultimately it needs to be replaced. But short term I’m thinking I might try getting that stuff motorcyclists use to repair their lexan windshields.

Two of the side ports have this white stuff on them: 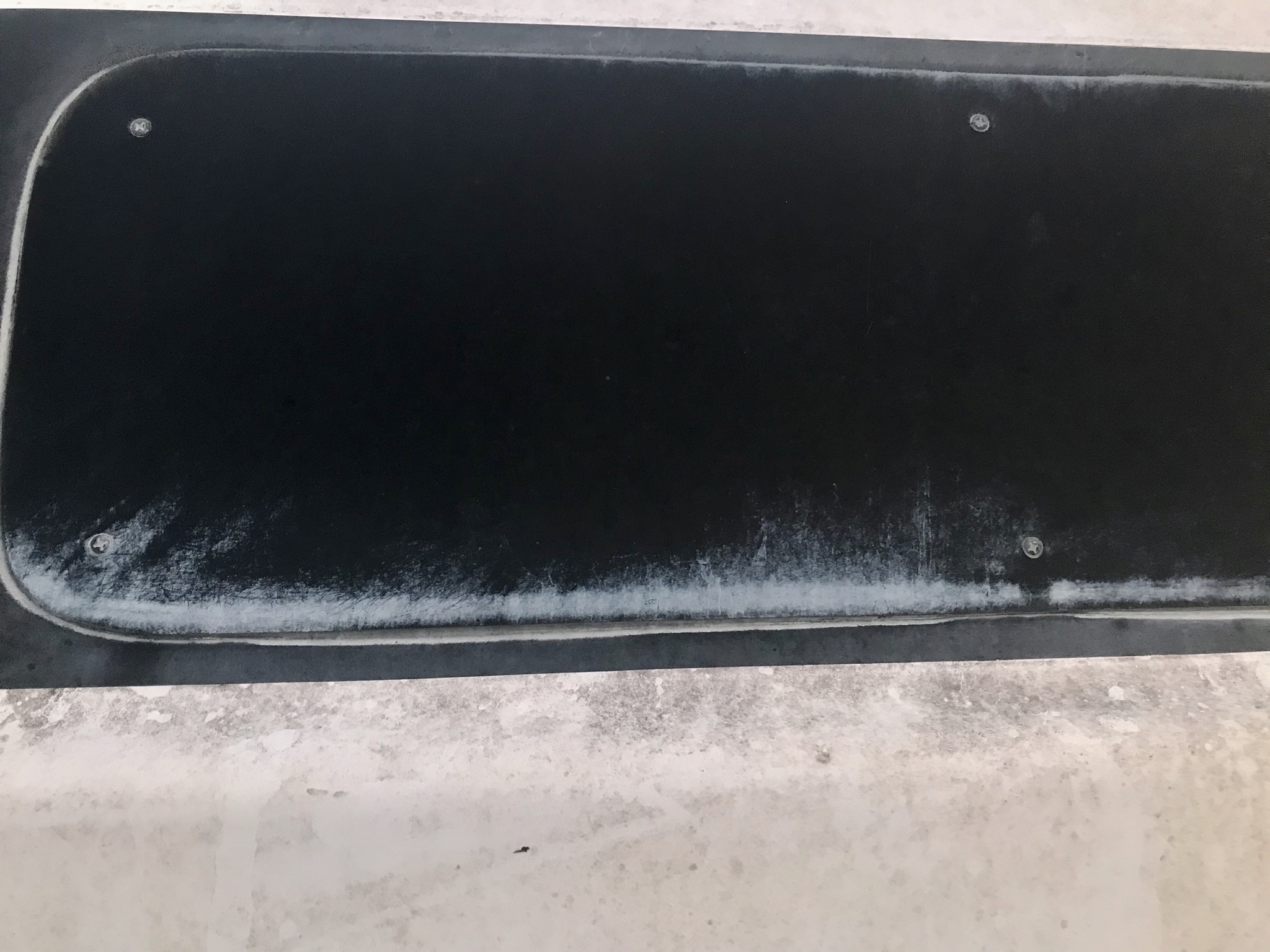 Pressure washing didn’t get it off. Knowing it’s lexan I’m hesitant to go crazy with cleaners. I might see if either Plexus or perhaps even vinegar cuts it.

The mast support pole is stuck: 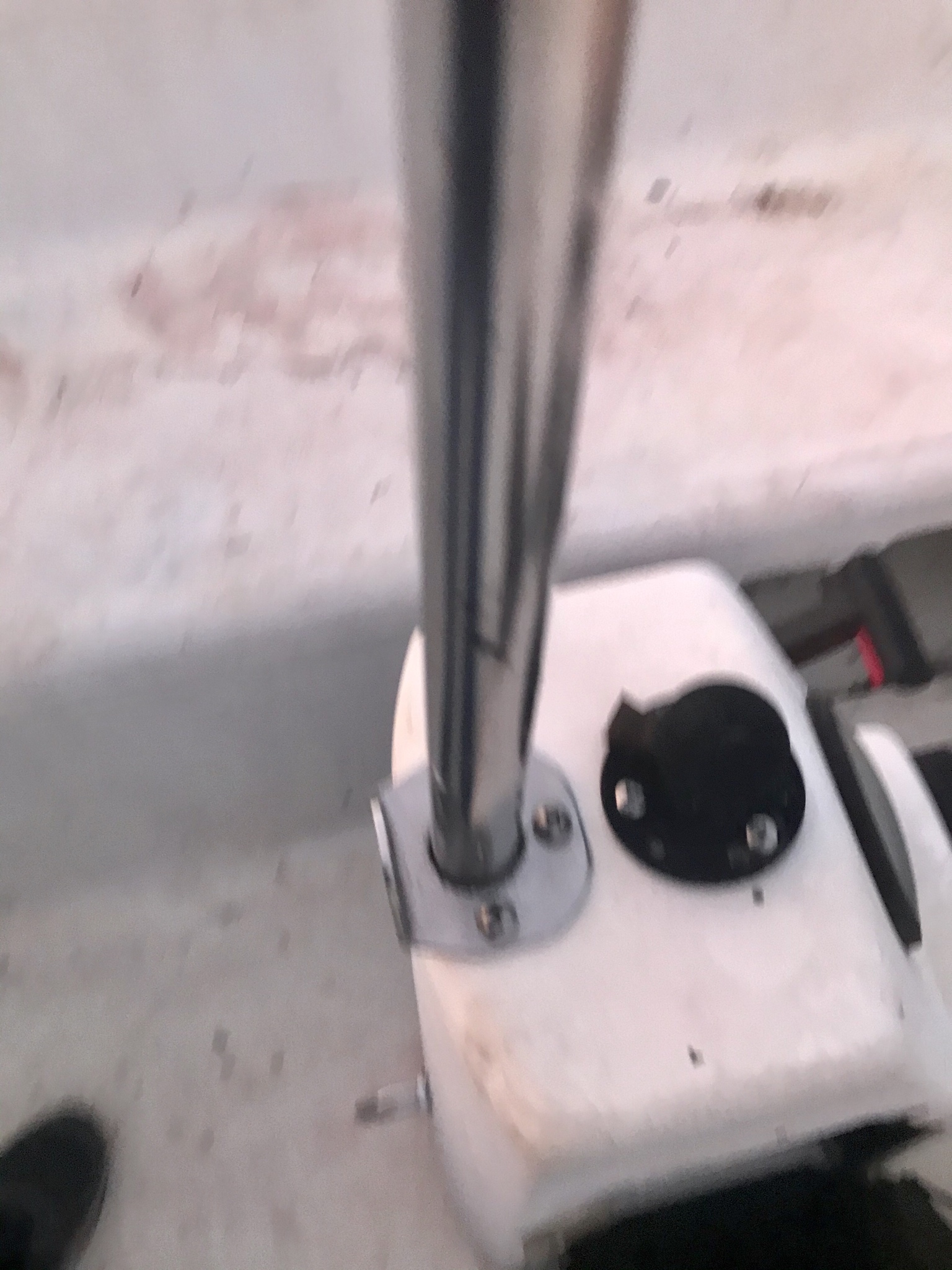 I bet I’ve emptied half a can of PB Blaster down it with no luck. I think the best option is to remove the mount from the pedestal and apply heat and force.

The gel coat has worn through in two notable spots. Here is the sliding hatch: 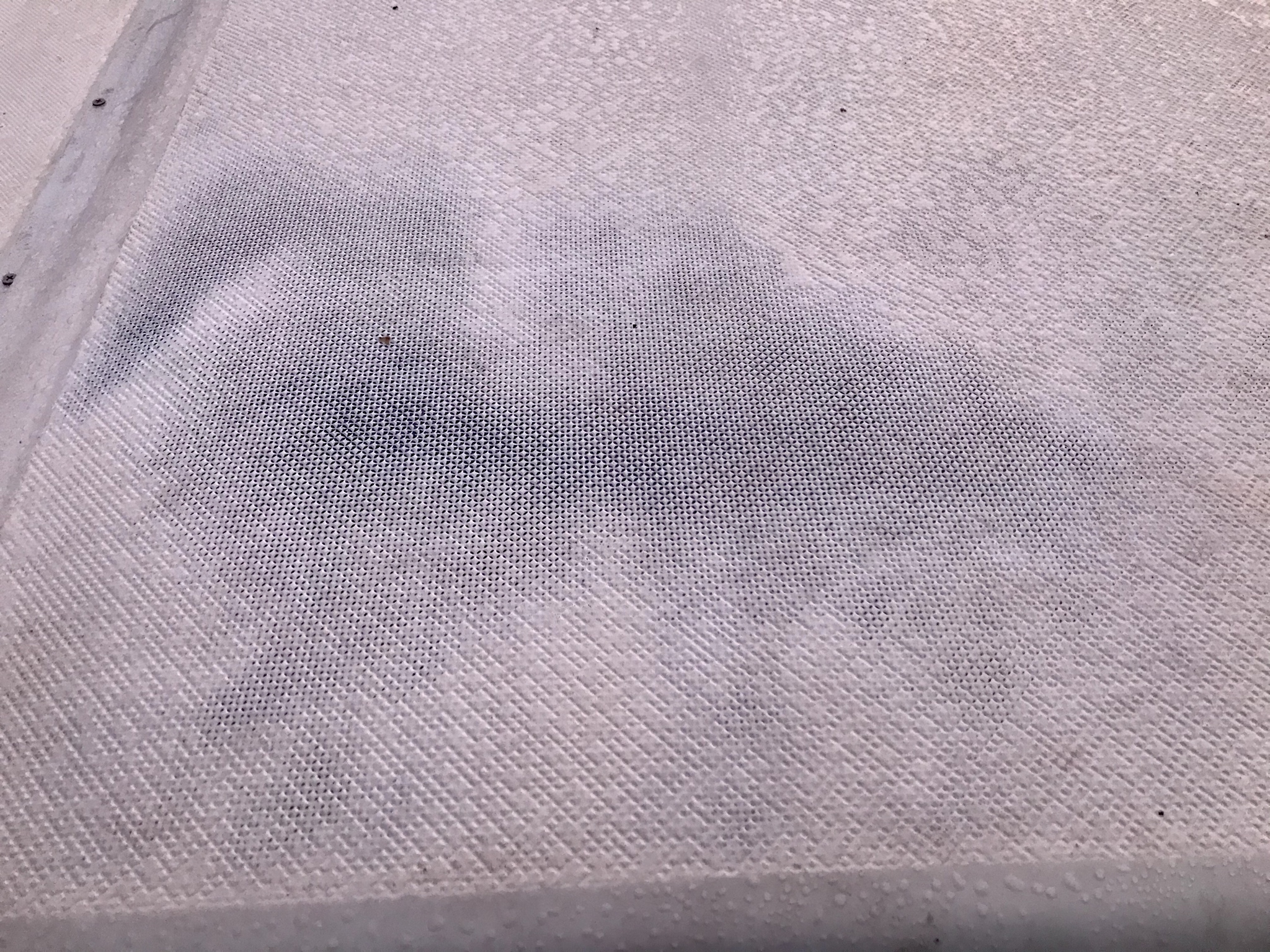 There is a similar looking place on one of the cockpit benches. I’m really not sure how I’m going to fix that. I don’t really want to paint the nonskid as most of it is ok. It’s just these two places and it would drive me crazy if it doesn’t match. I’m still researching and open to suggestions.

The original owner made this back deck: 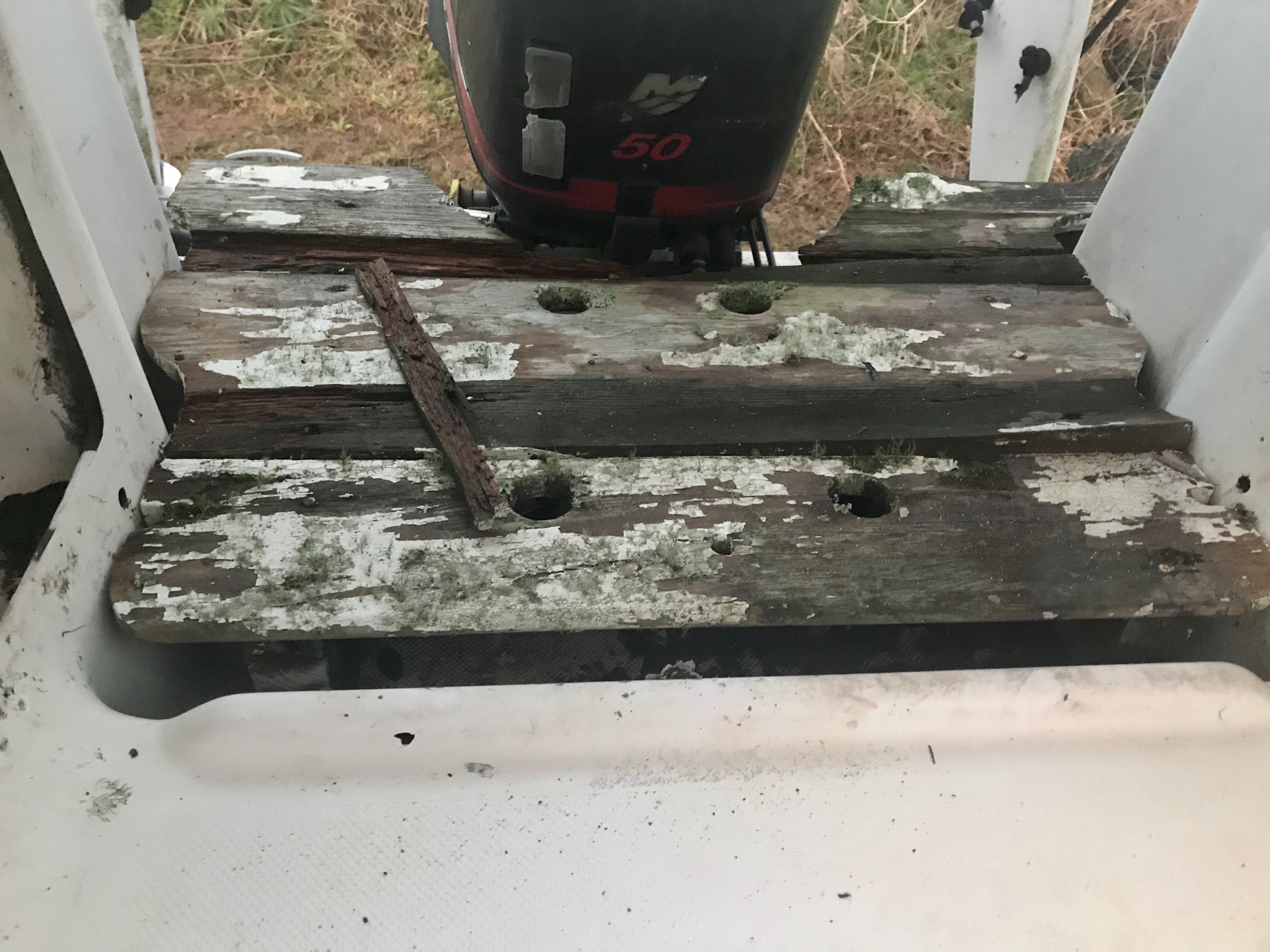 And boy I loved having it. It’s now rotten. I’ll make a new one for sure later in the restoration. I’m debating what wood to use. Thinking either teak or mahogany. I might do strips instead of a solid piece though.

The original owner also made and installed this arch: 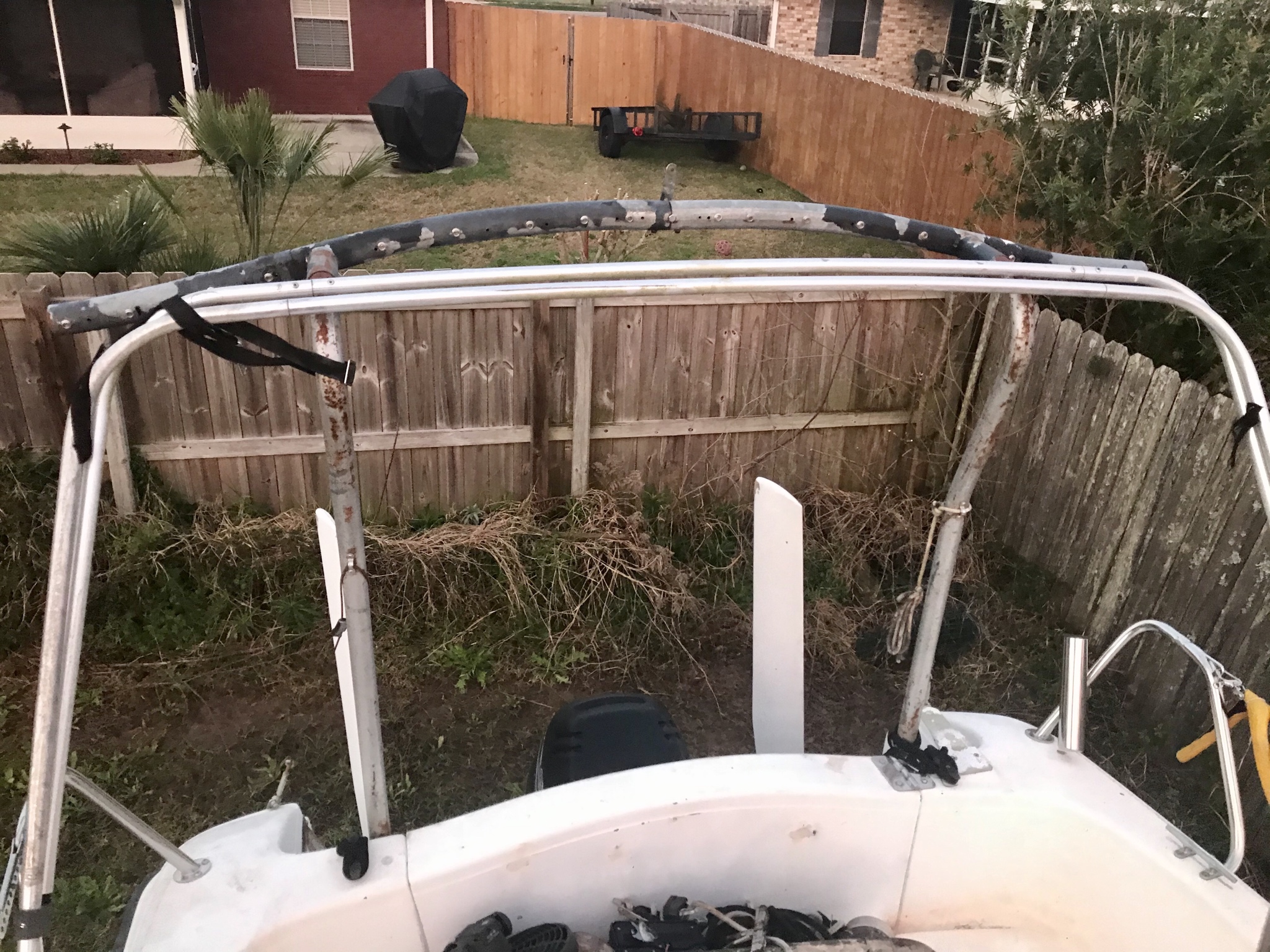 He intended for it to be remade out of aluminum or stainless but he never did it. I never did either as it held up well. I’ll have to play with it and see if it’s still structurally sound. Yes, I’d like to redo it eventually, but the boat bucks are adding up fast. 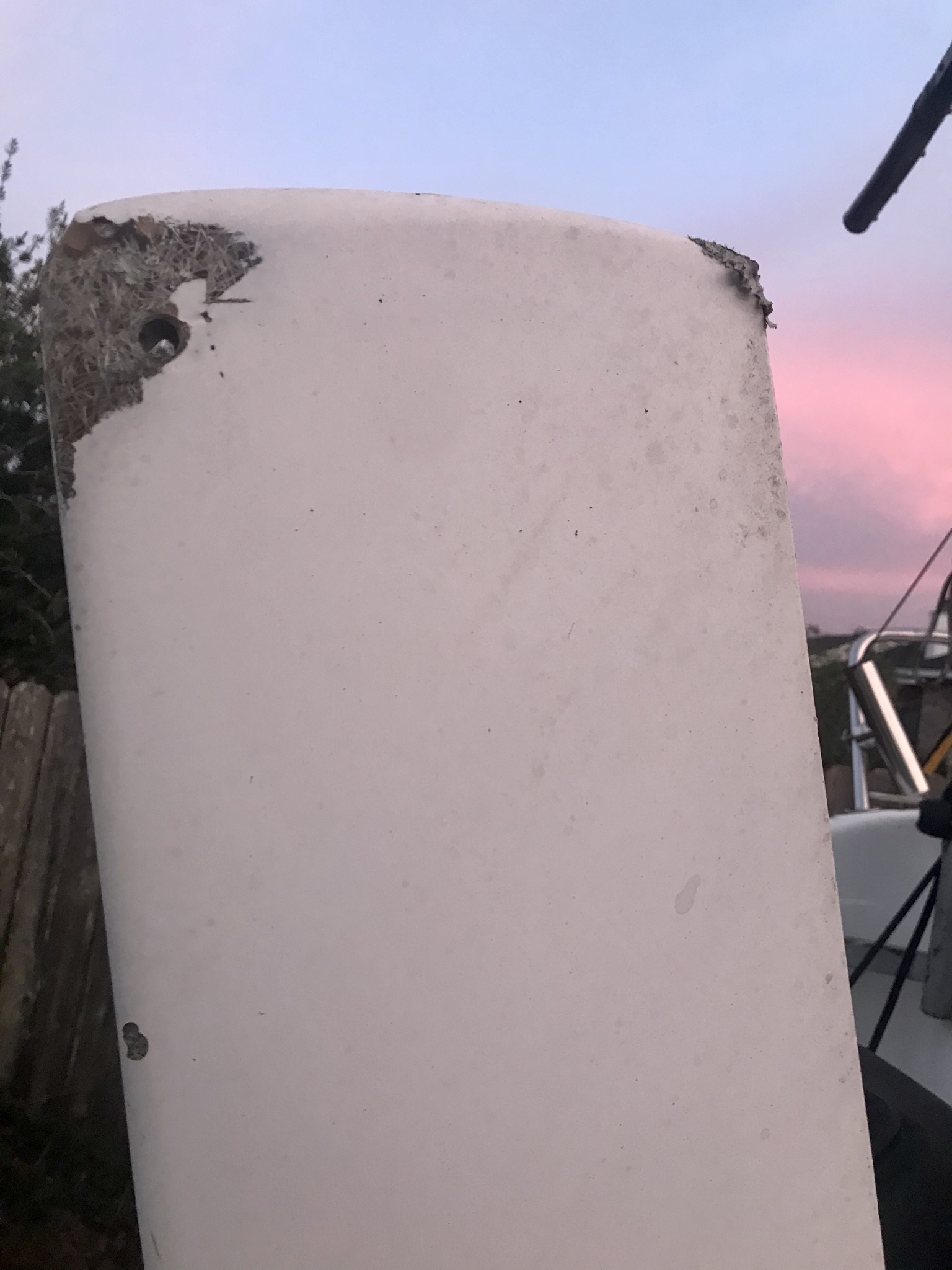 I’m thinking I might just paint the tips though since they are gonna wear again anyway.

While the hatch handle is rough, these teak steps I made for the boarding ladder have held up well: 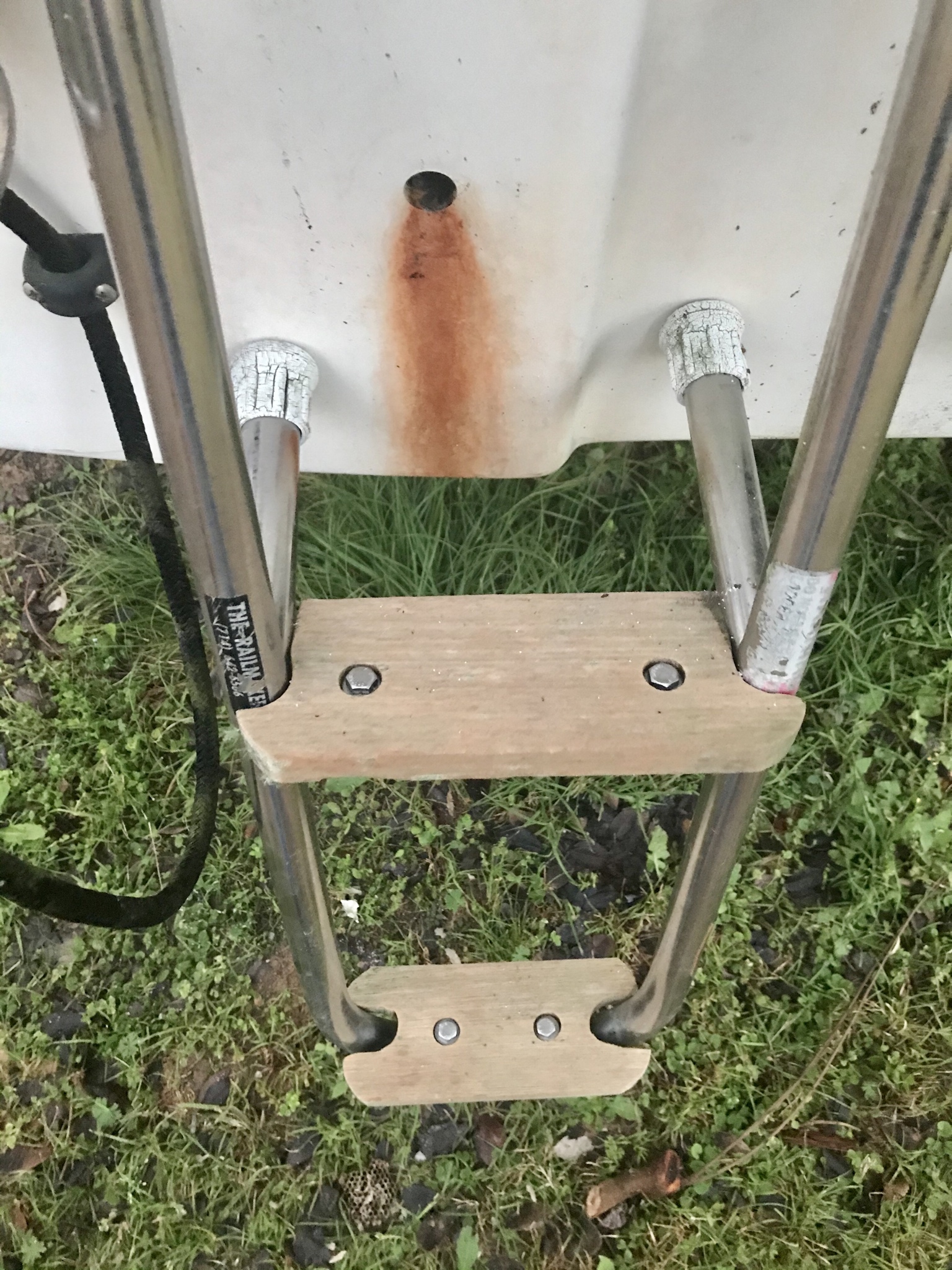 A little sanding, some brightener, and some oil and they should look great. Need to get new tips for the ladder.

I don’t have pictures of the following yet but the shopping list is getting long. I need to replace the standing rigging as it’s the original. Need two new batteries. The anchor light needs to be replaced and I already have a new led bow light to install.

I think that about covers the exterior. Lots to do on the interior but I’ll take pictures and detail that in a later post.
Top

Looking forward to your posts. You have come a long way in a short time.

Are you sure this is Gelcoat issue? Looks like some stubborn grime/mildew. I would bleach this heavily first to be sure.
I'm a big fand of Mary Kate On&Off. It melts away stuff like magic.

It feels different under foot than the rest of the nonskid but maybe you are right. I’ll try it and see. Thanks Russ.
Top

No real news to report, been busy working on house projects.

1. I have started sail shopping, or rather window shopping. I won’t be able to buy for a while but have been looking at prices and options. Holy sticker shock Batman.

2. My girlfriend’s son was playing on the boat and nearly dropped the swing keel. Which reminded me I haven’t put a support on the trailer for it yet. Need to do that.

3. Final thought: Might be a while before I can work on the hull. I’m thinking I might use some orpine wash and wax next just to get some basic protection on the fiberglass for now.
Top

Some sort of keel support would be a good idea. The M trailer has a cable that runs across under the dagger - presumably to catch it if the line gets loose. Unfortunately, it doesn't softly nudge it in if you accidentally leave the board down a tad when loading...

Just getting your head around what you need to do and pricing out alternatives is still progress. That way you don't waste those boat bucks!
Top

I asked the boys what they want to do today. They said clean the boat! Who am I to argue? 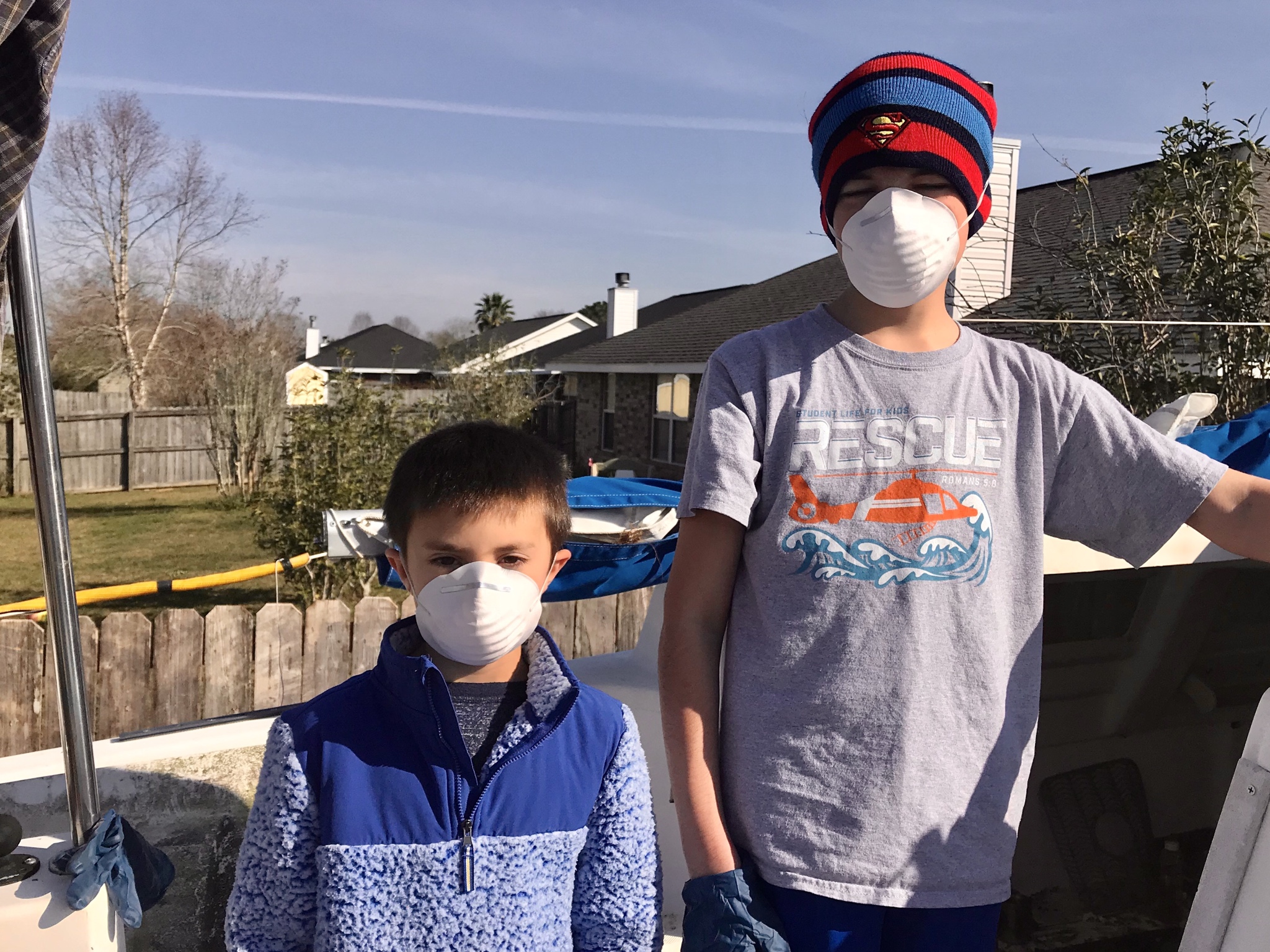 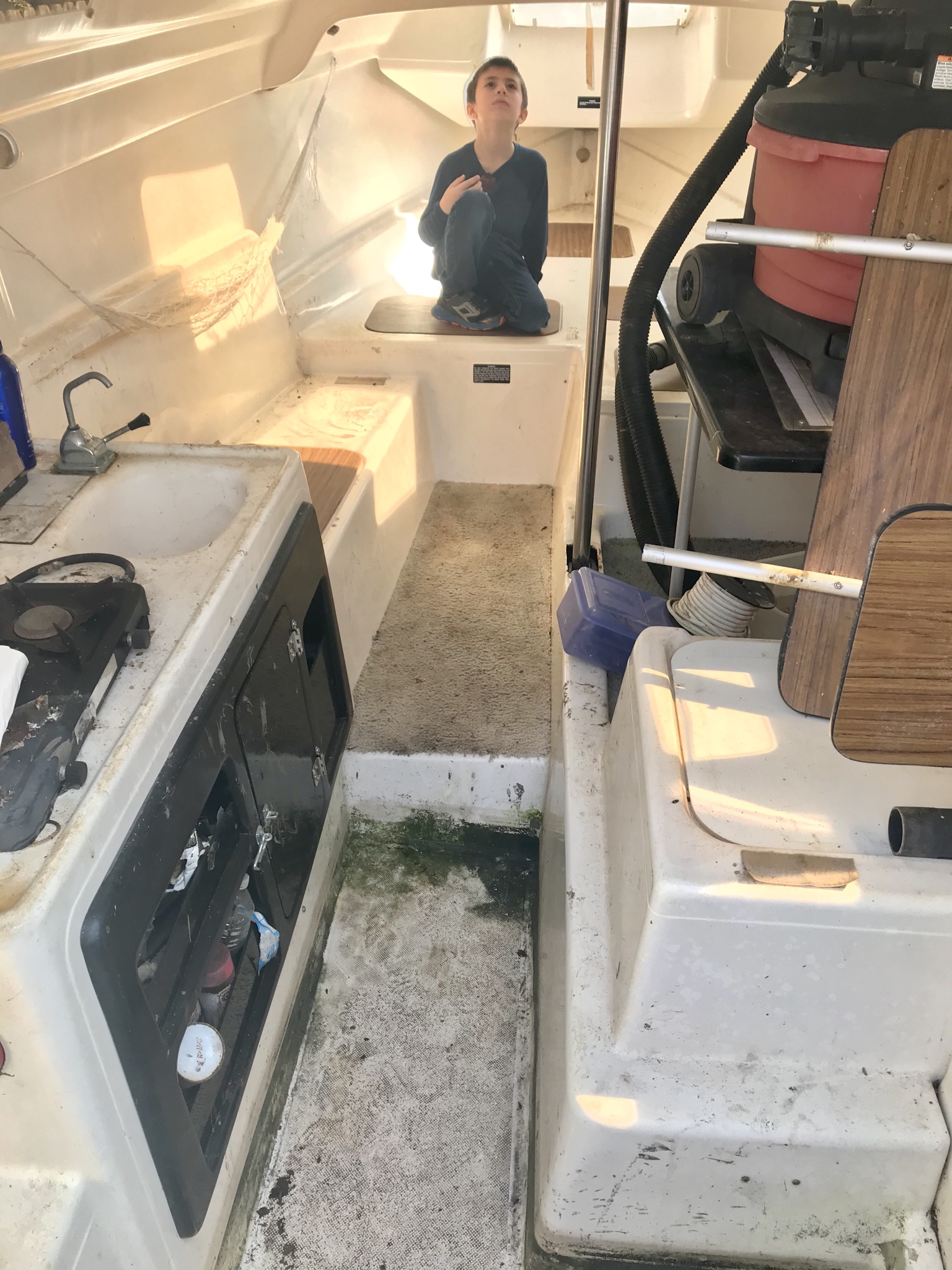 The cushions are in much better shape than I thought originally. We’ll wash them up and see how they look.
Top

More pics. Here is what it looked like a couple weeks ago: 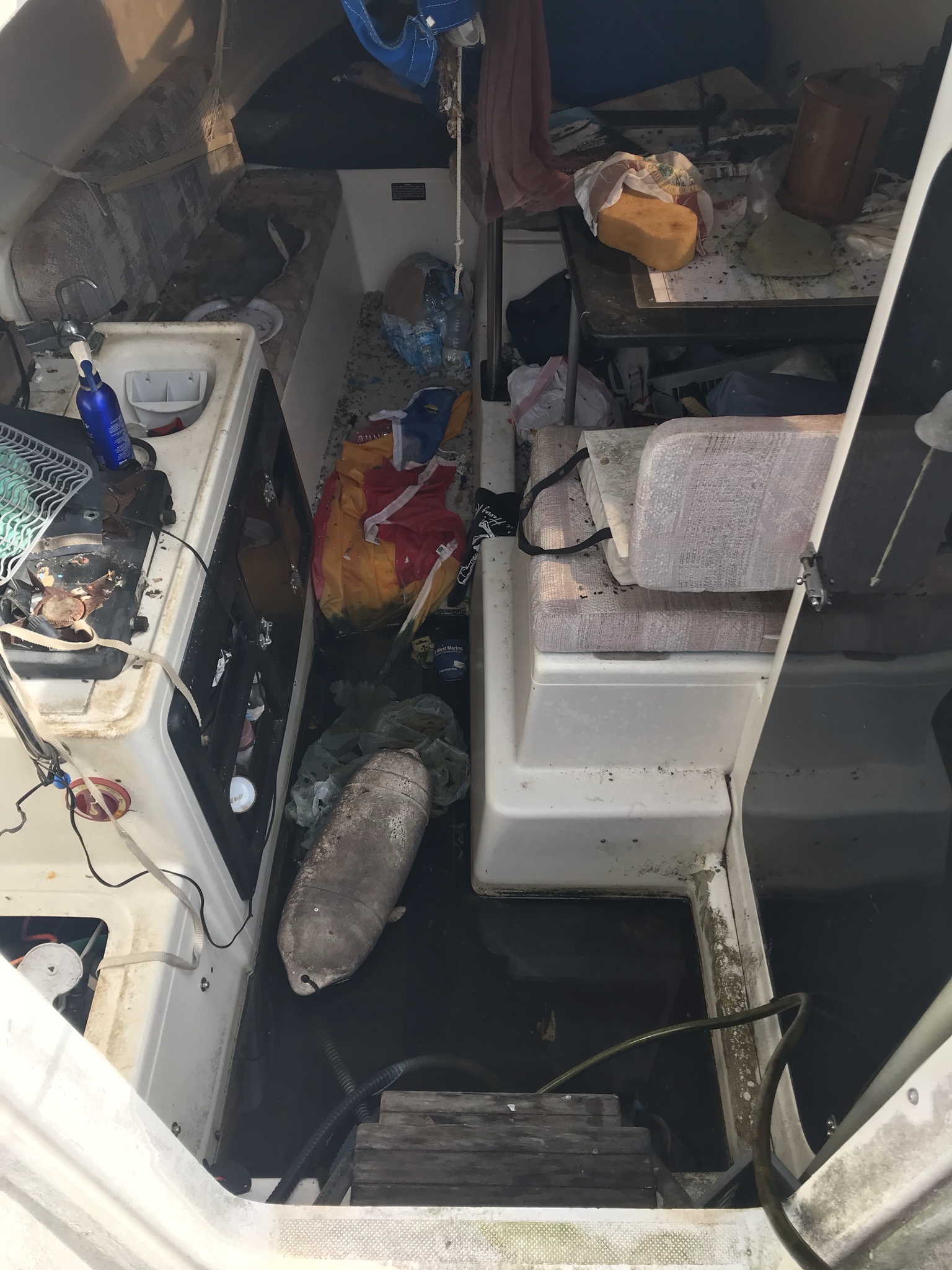 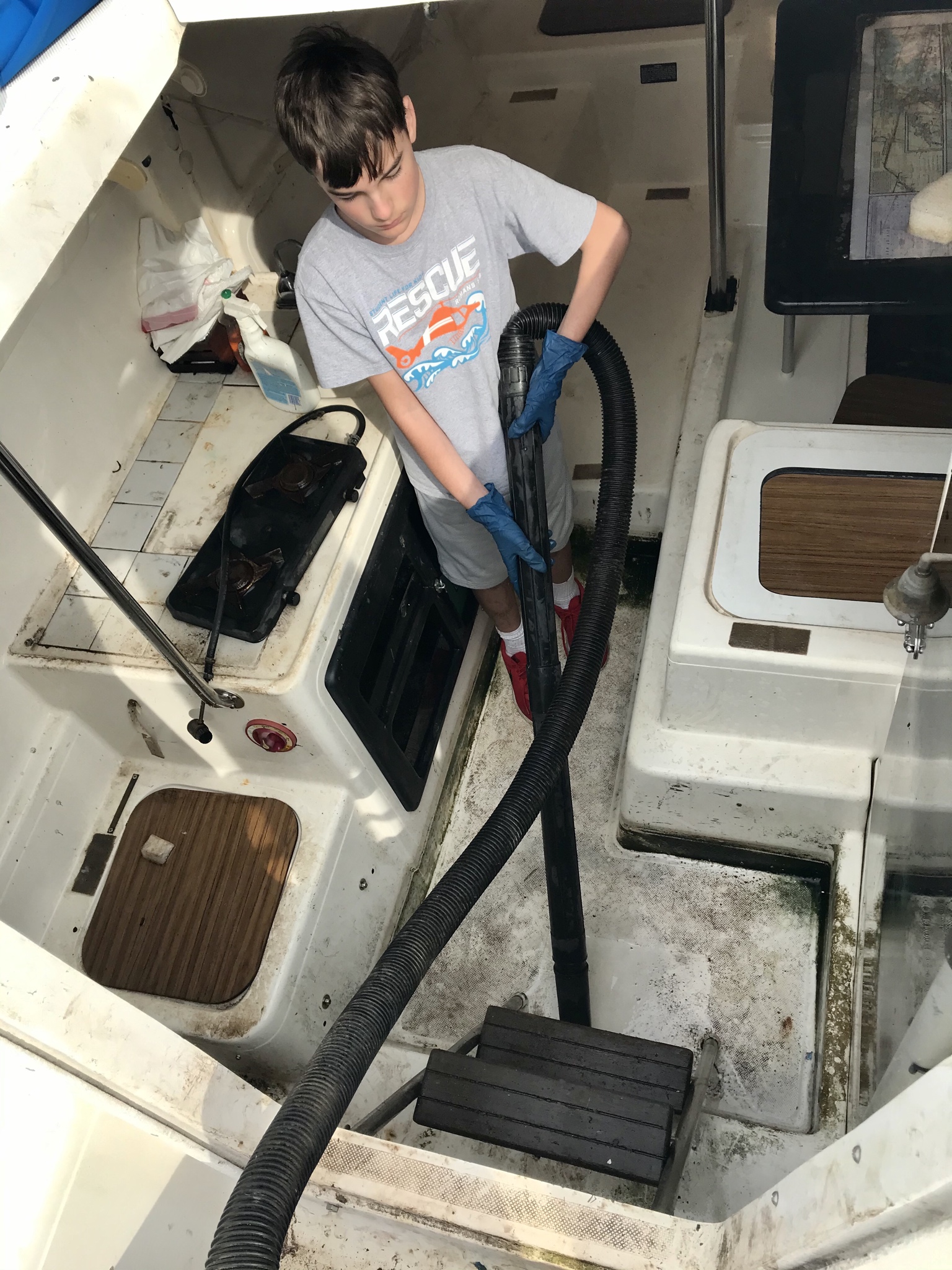 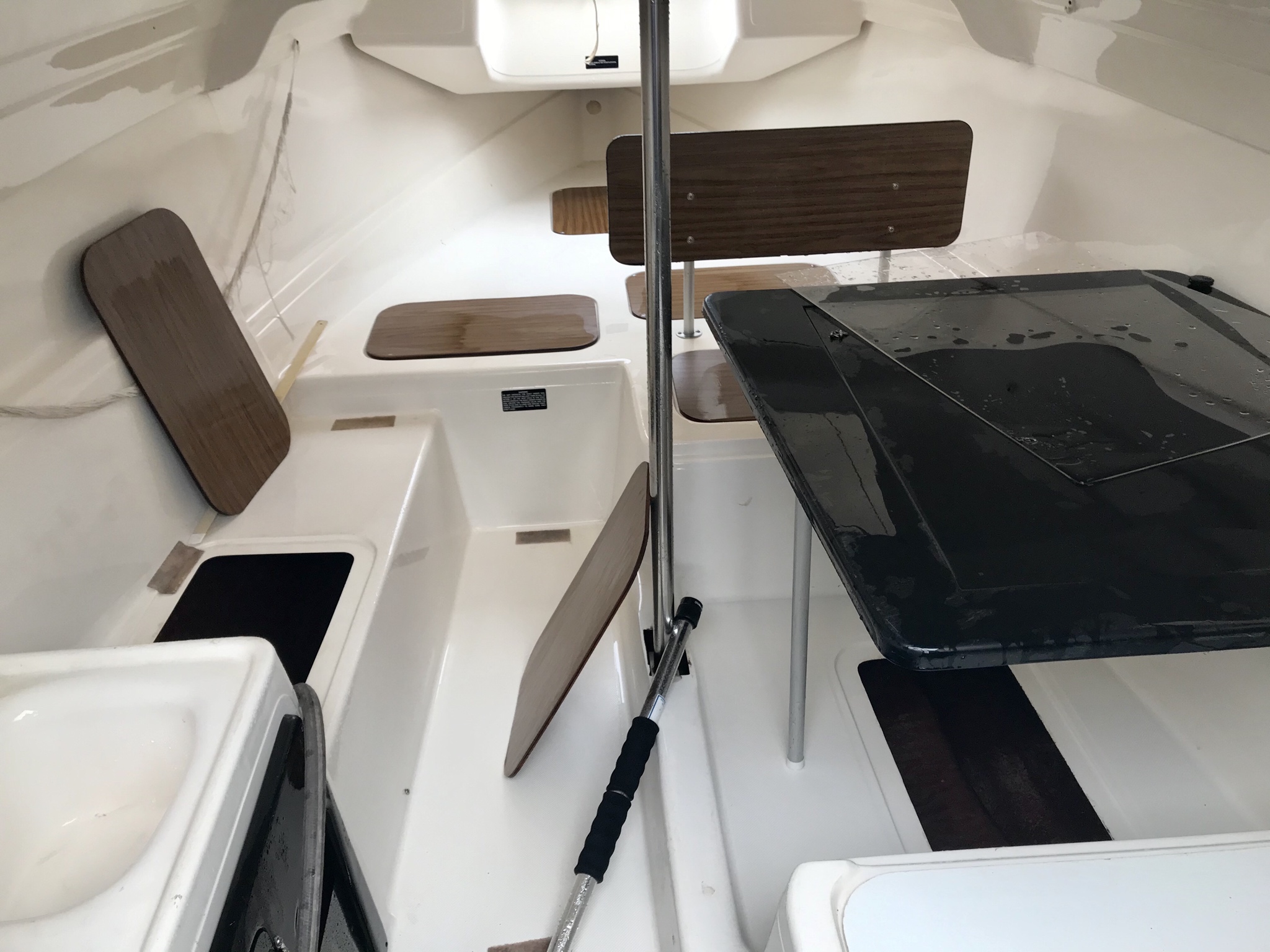 Water, lots of pine sol and scrub brushes. We hosed everything, scrubbed a section, rinsed, used the shopvac to suck the water out. And moved aft. Repeat. They boys were a huge help.

The caulked liner joint is almost black. Gotta get some sterner stuff after that mildew.

Still have to do the head and the aft berth. But the rest is clean and nice smelling again.
Top

Huge Progress! Hard to believe it's the same boat!
Top

Thanks guys. We’re making progress for sure. I’m hopeful we can at least use her as a motor boat in June for the annual Beer Cruise in Pensacola and meet up for a day or two.
Top
Post Reply
11 posts • Page 1 of 1

Return to “Repairs and Modifications”