Hi All, I missed the solar vent I used to have on my MAC 25 so much, I just ordered one for my

Now I have to decide where to place the 4" hole. On my 25 I mounted it over the head. The PO had removed the head door and forward wall, so it was really ventilating the whole boat.
I have seen many Nicro vents mounted on the FWD hatch. I'll admit the fwd hatch is the easiest solution, but it will face away from the sun in my slip (and I don't like the look of it there).

Any ideas or tips on this installation. I installed the vent on my old 25, but that was probably 15 yrs ago. Thanks, Tom
Top

Mine's on the deck, just ahead of the sliding hatch on the starboard side. Inside, that's sort of above the forward galley seat. As it is at a high point in the salon it's a good location to remove the most heated air from the cabin.
Top

I've installed a pair of nicrovents on our 26X, and have been happy with the results. I have one installed in the forward hatch cover, and the other cut into the lexan window in the head. I set the forward vent to blow into the boat, and the one in the head blows out. This helps set up air movement in the boat. I like the forward installation, because we bunk in the V berth. The ventilation is nice there, and helps with moisture accumulation up front.
Top 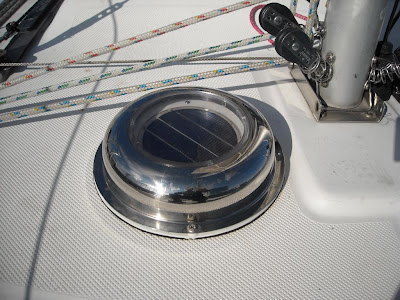 Also, the day/night nicro vs just the solar version

I found the SS ones have a slightly different snout than the plastic...trouble if you are trying to switch.

In high sun UV areas, go SS - the plastic ones will rot.

The latest ones dont even have a battery, but a storage cap which will run all night if charged during day.
Top

I placed my stainless steel Nicro through the forward hatch as it was the easiest fiberglass to repair if I made a major mistake. I bought stainless steel as I am a bit clumsy and would step on it frequently. After six years it still runs perfectly and the steel does not show any dents from my stumbles.

Have two one above head for obvious reasons and one above galley directly across form the head one.
Top

I don't have one of these yet, but would like one. I've given a lot of thought as to where I would like to place it.
I like to keep the deck as clear as possible for going forward, or sitting around, I don't like the idea of the hatch area because I like to sit up there.
To me, the best place to put it is on the port side cabin top about even with the mast, at least 18" away from the mast, making sure to keep clear of any fiberglass areas meant to strengthen the cabin top. For me, this will be where I place mine in the Spring.

I made two mistakes with my solar vent. First, I got cheap and bought an inexpensive vent off of ebay--at a very affordable price. Second, it is cheap plastic with no battery or capacitor to store electricity for dark hours when we are indeed in the cabin.

Perhaps a third mistake was mounting it on the forward hatch itself. My wife and son opened the hatch on more than one occasion and dropped the hatch the last inches to the deck.

The plastic lens first cracked and later shattered/fell out. I've got to replace it but am considering a steel Nicro mounted on deck. I like the idea of a vent over the galley too.

Sorry about the poor quality of the pictures.
...Doug

I'm thinking about locating a Nicro SS day/night vent in the plexi over the head in my 05 M. I have heard of others who have done the same. I just don't know who they are.

Thank you all for the response.
It's probably going to be a few months before it's warm enough to work on the boat, but I like planning ahead. I'll try to do a photo essay on the installation for those that follow after me. (I said that about my 25's window installation, but got so involved I forgot )
Thanks again, enjoy the warm weather if you live where it's warm.
Tom
Top

Our 3" nicro day/nite is mounted in center of the fwd hatch cover. abit further aft on the fwd hatch cover would have been better because the mast raising line tangentially brushes it (tho with no harm over 3 seasons of mast raisng and lowering in MI.
Ron
Top

I haven't decided where to mount it . I was thinking about the forward part of the sliding hatch .
We like to sit on the aft part of this hatch and hang our feet in the cabin , but forward shouldn't interfere with anything , should it ?

Any drawbacks to mounting in the plexiglass forward looking roof windows ?