NiceAft wrote: ↑
Thu Apr 01, 2021 3:12 pm
I've been thinking about that for years; I just have not come up with anything tasteful for "Nice Aft", I'm looking for a design to go with the name.

Think “Peaches” for inspiration. Not quite sure how that works on a hat, but that’s what it’s got me thinking about at least. I found out about that site last year, and purchased a couple of shirts from them. Nothing with the "Aft" imagery I have in mind.

I named the boat for my wife, but asking her to pose for that imagery is asking too much.

So I finally got around to the open heart surgery!

The impeller was still soft, not split or broken, but I do see it is actually the same shape as when pushed into place. The original has straight blades or fins and you have to bend them to get the thing in. This original one retains that shape when you take it out.

I have read that an impeller can "take a set", where it takes on the shape it is usually run at, and then cannot adapt to higher revs, thus could be my problem where it pees and runs fine at lower revs and then overheats at higher revs?

Also the metal plate it spins on is super polished, as is the housing.

Have changed everything for new and put the impeller back in turning in the same direction the old one came out. The manual says to turn it "anticlockwise" but from whose perspective? In the end I put it in place then spun the housing around it, as I couldn't get the thing to line up with the woodruff key. As far as I could tell all the splines were facing the right way, ie the same when it came out.

Filled the tub with water and from the pee stream it seems to work, identical to before. If there's any difference I'd say it's maybe even a tad weaker on tickover, while more forceful when the revs go up, but that may be a memory thing, as it's been a while since I last saw it running. Or it could indeed be a sign that it was previously 'set' and now more responsive to the actual revs?

The guy who bought my old boat keeps in touch and when he heard I was going to try and change the impeller today he offered to come and help, also learn how so he can do his one. It was handy having someone else there to talk to and offer a pair of hands, though also distracting. For example I didn't get around to running a hose through the inlet tube, or anything really.

Anyway, all done, all bolts were dabbed with copper-based anti-seize, and it seems to still work. I'm not sure if the tractor at the local boat club can launch when there is a very low tide? If he can, then I'll try launching again tomorrow...

But to be blunt, that guy is a bit... different, and difficult, so not expecting to get any sense out of him when I phone. I'll try...

I'm glad we're both going through the same process at a similar time. This thread was super helpful to me for working on my 1998 BF50. The past 2 days, I got all of the routine maintenance done - oil/ filter change, gear oil, water pump, compression check, spark plugs, thermostat, timing belt inspected, adjusted throttle linkage to achieve wide open throttle, and replaced the main pivot tube/bolt on the stern bracket. My pivot tube ends were severely rusted under the plastic caps, but it turns out the rest of the tube was in ok shape and could have been left alone but now it's not an eyesore and I've got the peace of mind that my motor won't fall off. My thermostat was super nasty and seized open. I forgot to order a new thermostat gasket, but I had a roll of rubber fiber gasket material in the garage so I cut my own. I also cut an extra gasket and am keeping it with the old water pump and spark plugs inside the boat... just in case.

I notice your lower unit has an additional part that mine does not. Do you or does anyone here know what the third vertical component is that's sticking up from Drifter's lower unit? There is the drive shaft, the shift rod, and then a little piece that looks like it's got a white zip tie on it between his thumb and pointer finger. My outboard does not have this piece. In fact, that little compartment was full of fallen rust flakes, and the hole at the bottom of that location was caked with crud that I cleaned out with a little Allen wrench.

The engine was my biggest concern about my recent boat purchase, due to its age, is been in salt water for at least a couple years, and I have virtually zero knowledge of its past maintenance history. I'm not nearly as worried now that I've torn it apart and gone over everything. I wish my sails were in nicer condition but at least they're present and functional!

Good luck on getting your boat launched and I really hope you have fixed your alarm situation! I know it's one step at a time and you need to walk before your can run, but I'm looking forward to eventually seeing your pics with the mast and sails up!

Drifter's image with the part that mine doesn't have:

And mine for comparison;:

I too am confused over that thing? It seems to be some rubber hose, with a connection attachment - but it's closed off and I couldn't see anything it's supposed to connect to?

The barbed connector is closed. You'd have to snip the end off it to open it, ie it's factory closed, though that white cable tie doesn't seem factory.

Glad you're finding the thread helpful

It's certainly helping me

Well tried getting my brother in law to phone the tractor guy... but he didn't get around to it in time. Just voice mail. I'll try driving there tomorrow, show the security guard the tide table, point to the lowest tide and ask "Can or not?" If so, might be able to go on Monday, if I can get some client work done tomorrow. Then again I might have a Zoom meeting on Monday. Mmm. We're coming into the fasting month of Ramadan, and Muslim or not it's poor form to go fishing in the hot sun, slurping cold drinks from the ice box while Muslims can't eat or drink during daylight hours. So if I don't launch in the next few days then I'll have to wait a month to find out if the overheating is fixed or not..

The engine was my biggest concern about my recent boat purchase, due to its age, is been in salt water for at least a couple years

Mine is from Japan; this boat has never had a trailer before. The little Honda has been at sea for 25 years! That it has survived at all is testament to the quality, so I'm hoping to baby the thing for another 20 years

As for photos of the thing sailing, that could be a long time yet...
Top

It might be connected to a pitot tube to measure speed through water. Some Honda engines have them.
Bill
2001 26X Simple Interest
Honda BF40D
Top

It might be connected to a pitot tube to measure speed through water. Some Honda engines have them.

That does sound likely, yes.

Welp, just discovered I need to split it all apart again before using it

I thought I was being careful by putting anti-seize on all the bolts.

Seems that was a big boo-boo, so I have to re-do it and use boring old grease instead.

OK, now i'm confused, because this link says the total opposite:


The chief culprit of seizure of metals is corrosion, particularly in marine surroundings. Corrosion happens due to galvanic action between two metals.

Qualities: Good quality anti-seizing compound would be a thick paste containing lots of active metal ingredients and little of grease.

Zinc based anti-seizure compounds are most suitable for its usage in ambient conditions. At elevated temperatures, copper based ones are commonly used in marine environment.

So which is right?

Any experience with copper-based anti-seize by you guys, in salt water?

I don't put anything on my lower unit bolts. I remove them every two or three years at most. I've never had a problem getting them out. The first time I removed them on my new engine they looked like they may have had some blue locking compound on them. The only thing I've ever put on any bolt during assembly is a little bearing grease. I will defer to anyone with specific knowledge. I've never even considered the problem since they have always come right out.
Bill
2001 26X Simple Interest
Honda BF40D
Top

I use anti seize on all lower unit and shroud fasteners when I pull the Etec apart. I run in brackish water. I can remember when I was growing up, we were always drilling out broken water pump bolts, etc. I don't want to continue that family tradition. Grease would probably be fine too. As Be Free says, frequent service should keep the fasteners from becoming one with the casing.

I wash and flush after use, and my boat stays indoors between uses. So, I'm not as worried about galvanic corrosion as I would be if I was in a slip. But I would still use anti seize on it. I've tried it dry before and it didn't work out that well; but we weren't servicing as often as Be Free...

2. Flexible tube on lower unit is a pitot. http://www.marineengine.com/boat-forum/ ... weird-tube.

3. Impeller rotation is CCW, as viewed from below, just as you installed it. I once overthought the matter where the manual said, "in the direction of rotation." Well, any fool who looks under the engine cover can see the flywheel marking a CCW rotation. So, stupidly, I thought that meant the .......... no, I won't say it.... it will confuse someone...... Let me say that I later found out that there is a primary gear that takes the CCW rotation of engine and converts it to CW rotation. So, your impeller installation is impeccable.

Have a great launch. 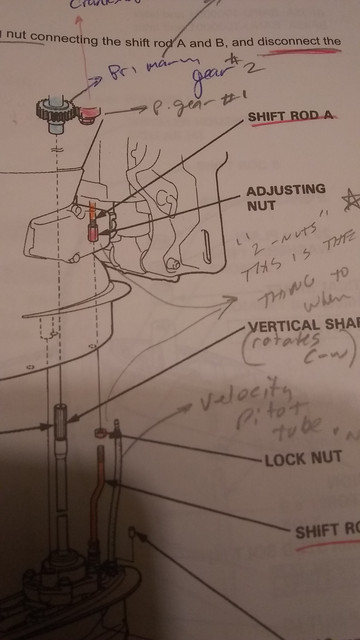