If you sneak a peep at my post history you'll know that for many years I've thought about, dreamed about and asked silly questions about buying a Mac and trying to import it here to sunny tropical Borneo...

Well on Monday 17th August 2020 I sent the money... The following day the boat dealer received it.

Now we are waiting for the actual boat owner - in Japan - to sign the sales contract and provide all the details to prove ownership. IF all goes to plan the X should be delivered to me here in Borneo at the very end of next month.

My first question is ... is it really that old?

Here is the boat (I really want to say "Here is my boat" but things are only 99% regarding the sail and it still needs to survive being shipped to Borneo..):

My next question is...

What do you esteemed ladies and gents think I really need to know about this particular boat? Do you see anything obviously wrong/weird/broken or interesting I should know about?

(As an aside, I just kept hitting a brick wall trying to buy a boat from America. American sellers on Craigslist just ignored me, yacht dealers politely informed me such a boat wasn't really worth their time and/or wouldn't be listed with them and that I should look on Craigslist. One chap suggested some local website for Los Angeles, which I joined and asked around - and was promptly banned for "spamming"??? In contrast a few people locally have purchased motorboats from this Japanese site without problem. I nearly bought a MacX from the same company last year but it was sold before I could complete. That one was like new and heartbreaking to lose it, though it was nearly $5000 more expensive. Macgregors are very rare in Japan, as their trailer laws are so strict and very few launching ramps, so the concept of a trailer-sailer makes no sense there. After finding another Macgregor on that site, I just decided I'm not getting any younger and should just go for it!)

Did I just buy a decent boat, or the worst MacGregor ever?

It's not a 1986. Definitely NOT the worst ever (assuming that the pictures reflect current condition).

Sails are not shown, so you may be in for a new set. Otherwise, looks like a good cleaning, paint, and re-bed/replace windows and re-bed deck hardware.

Not sure what to think of the power windlass.

If the Honda BF50 is in good shape, that will save you some money. Get it serviced before you go out. Water pump impeller, lower unit lube, engine oil, plugs, filters, etc.

Swing keel, hardware and slot condition need to be assessed before you go out.

All through-hull hardware and fittings need to be checked and re-bedded or replaced, as appropriate.

Look at all hardware carefully. It says it has been salt water kept, and it may have been in the water a lot.

Looks like the bulk of it is there and in fair condition.

Based on the shape of the rudders and the companionway steps, it is definitely an early model X, probably between 96 and 98 l, if I had to bet.

If you have the serial number, we can tell you for sure.

Looks OK overall, fairly stock but with some "personal" kinds of mods from the previous owner that seem a bit unusual to my North American eyes. But these boats are relatively easy to work on, and over time I am sure you will transform it according to your taste and needs.
Top

Maybe other Mac owners/dealers have a hard time believing you are really in Borneo. They think you are fake. I know some Americans who have shipped to Australia. Borneo? Might be intimidating for shippers.
You will have to post photos. Such a beautiful place.

Do you have any idea what the trailer is like? No pics? Is there a trailer?

I can't add much more than what is posted above. Some cleaning up. That windlass? Hmm, an interesting location.

Keep up updated. As mentioned above, the serial number will identify the year built.
--Russ
Top

Japan has very strict laws on trailering, and very few boat ramps. About the only watercraft with trailers are jetskis and very small boats, else you need a special license and permit to go on the road.

This is one of the reasons I was trying to get one from America, as a much wider choice of boats and prices, and most with trailers. The local boat shop does have some American imported trailers which are galvanized. Unfortuantely the shop owner has been too busy to check his stock lately. I know he has a single axle trailer intended for boats "up 7.5m" (24.6ft) and a bigger twin-axle one designed for boats "up to 30ft". I'm hoping he has something in-between!

Can someone tell me the approx weight of a fully-loaded 26X, for the trailer?

Local ramps receive ZERO maintenance and are slippery as ice-rinks, so the less weight the better. I won't be towing huge distances, about 3 hours max, so am sorely tempted to try the "up to 24ft" version. Lighter is certainly better when it comes to Borneo boat ramps and my current boat hangs about 2 ft past the end of the (locally-made) trailer.

Let me see if I can do some pictures...

My very first boat ever, the 19ft gas-guzzling deep V thing that took me 6 months to replace all the stringers and basically rebuild it, because cabin boats are rare here (that's the seller in the pic, not me):

After rebuilding, at the local marina... As you can see, by local standards it was quite a luxury boat...

My current boat, also a rebuild:

That's my father in law, wondering why his crazy white son in law is buying such a monster of an empty shell...

On the bright side, no stringers - all solid fiberglass:

After rebuilding (Yes, that little Kembara was far too small to tow it, yes it managed anyway. I have a Hilux now, all modded for off-road):

So you can see, compared to what I'm used to and the local boats, the

is a floating palace

Is that as scary as it sounds?

Well, you certainly have the skill and experience to restore boats. The X should be a dream compared to those other boats.

So are you originally from Borneo? If not, what got you there?
--Russ
Top

I have heard (and ordered some) that 'butyl' or something is great for that? I'm hoping it will do a nicer job than the mess the PO has made on the windows. Apparently the windows were "like other yachts" leaking.

Can't blame him for the mess; I'd probably have done the same thing until searching for 'bedding' the hardware

Well, you certainly have the skill and experience to restore boats. The X should be a dream compared to those other boats.

It's been my dream for a long time... my first post here was 10 years ago!

I certainly don't overly enjoy the fiberglass and itchy stuff, and I don't have an actual workshop. Hopefully this

won't need much work beyond the sealing stuff, and gelcoating the stern area. It needs a new stove and will probably need new sails.

Hopefully I can get a season out of the existing sales and rigging... we'll see...


So are you originally from Borneo? If not, what got you there?

I'm from the UK, just outside London. Met my future wife there, as I was thinking of moving to Thailand and someone said they knew someone from there. Well I guess it's the same area...

We got on really well so she talked me into trying Borneo and have been here ever since, and this year, finally, getting my permanent resident status! Yes, 15 years and already married... it would be vastly easier in West Malaysia or somewhere but this is home now.

As mentioned 10 years ago, I work online as a marketing consultant/advertising writer, still doing that but more of the consulting and less of the writing. I have a regular client and some old clients keep coming back so I get by OK. My income if I were in the UK would be literally minimum wage but by local standards it's a good middle-class income, plus my wife works as a lecturer so we're comfortable enough.

Put it this way, today the alternator died on my truck, had to get it towed. Total cost was 100 Malaysian ringgit - which is about $24. In the UK it would be more like 250 GBP!

And the great news is... the owner has signed the contract and the boat is officially mine now!

Just have to hope it arrives in one piece...
Top

Another "Welcome" to you into the MacX ownership club.
This forum will try anyway we can to help you with advice from our collective experience.
Opie, in North Carolina
Top

One comment. Check your Honda control cables when the boat arrives. The cable routing seems impossibly tight without the necessary slack.
Your boat pic is here with a normal boat cable arrangement below it. 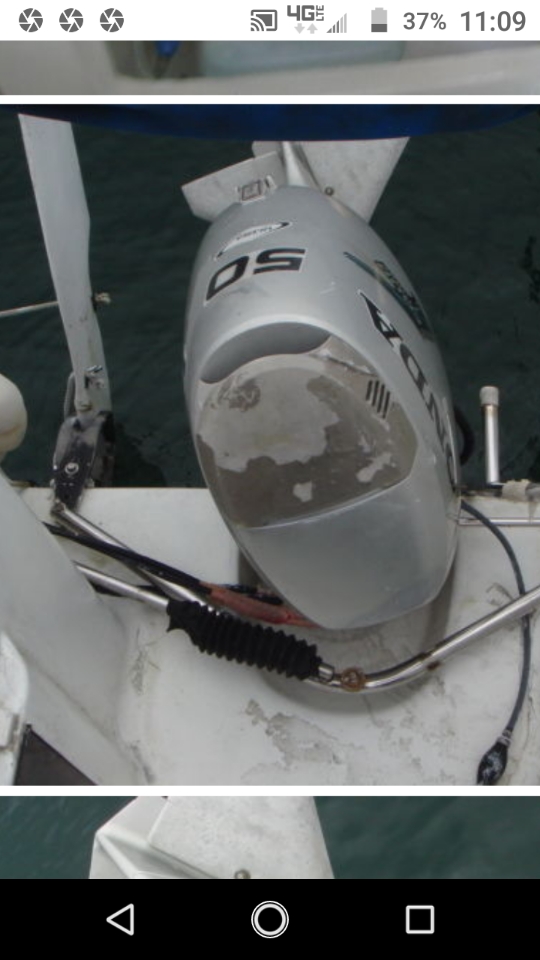